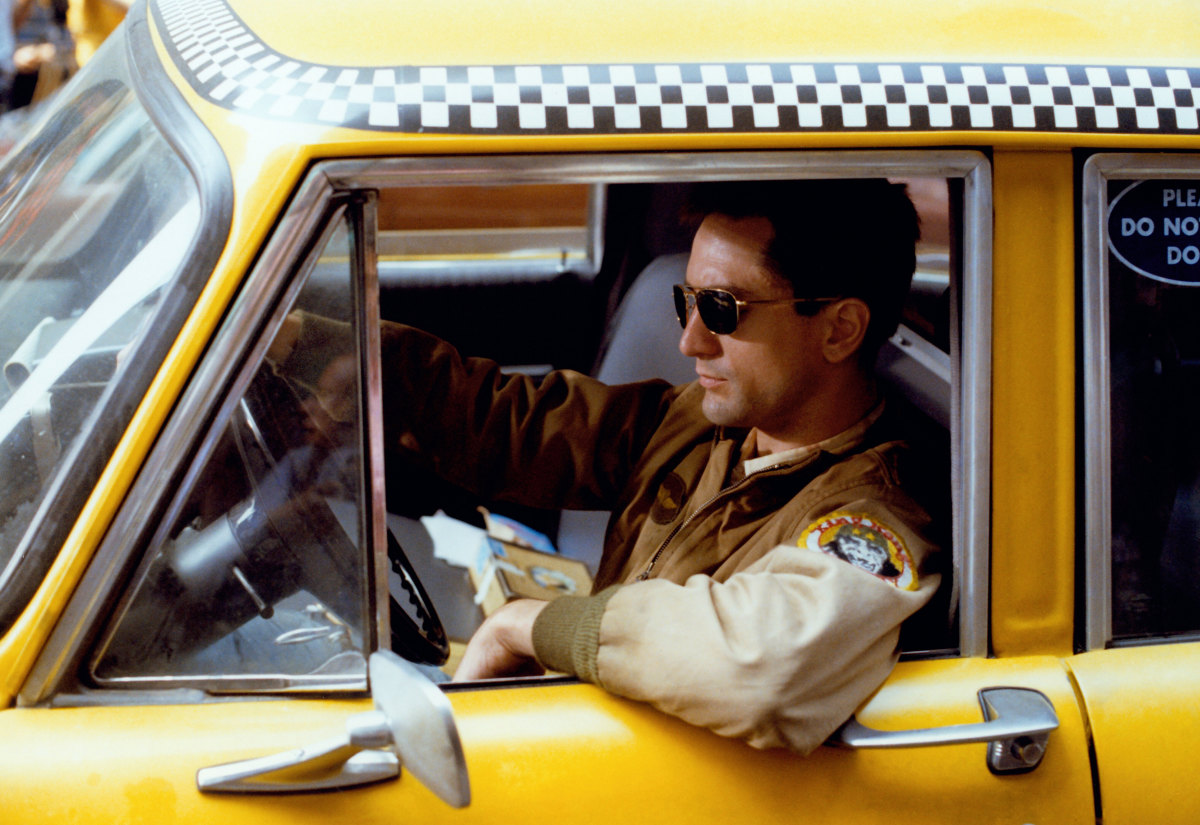 A mentally unstable veteran works as a nighttime taxi driver in New York City, where the perceived decadence and sleaze fuels his urge for violent action by attempting to liberate a presidential campaign worker and an underage prostitute.

Travis Bickle is a lonely, impotent and insomniac ex-marine, who spends his nights driving his taxi throughout the shadowy streets of mid-70’s New York City. Travis is fed up with the society he finds himself surrounded by, wishing that a “real rain will come and wash all the scum off the streets”.

But Travis’s personality sees him being unable to connect with virtually anyone, until he becomes infatuated with a blonde campaign worker named Betsy and then later meets an adolescent prostitute named Iris. As Travis grows increasingly more paranoid of his situations, he begins to sees these relationships he develops as ‘missions’ of which he will need to be the saviour.

This picture is more ferocious than Scorsese’s volatile, allusive “Mean Streets.” “Taxi Driver” has a relentless movement: Travis has got to find relief. It’s a two-character study—Travis versus New York. As Scorsese has designed the film, the city never lets you off the hook. There’s no grace, no compassion in the artificially lighted atmosphere.

The neon reds, the vapors that shoot up from the streets, the dilapidation all get to you the way they get to Travis. He is desperately sick, but he’s the only one who tries to save a twelve-and-a-half-year-old hooker, Iris (Jodie Foster); the argument he invokes is that she belongs with her family and in school—the secure values from his own past that are of no help to him now.

Some mechanism of adaptation is missing in Travis; the details aren’t filled in—just the indications of a strict religious background, and a scar on his back, suggesting a combat wound. The city world presses in on him, yet it’s also remote, because Travis is so disaffected that he isn’t always quite there. We perceive the city as he does, and it’s so scummy and malign we get the feel of his alienation.

‘Listen, you fuckers, you screwheads, here is a man who would not take it any more…’ Re-released at a time when the grievances of white men are once more setting the world agenda, Martin Scorsese’s unflinching plunge into the darkest recesses of the human soul feels painfully relevant. In anti-hero Travis Bickle (Robert De Niro) we see traits of what would become the archetypal online troll – he’s bitter, reactionary and self-involved, describing himself as ‘God’s lonely man’.

But still, Scorsese and screenwriter Paul Schrader never treat him with anything less than the utmost empathy. This is a man scarred by war, perplexed by the permissive society and desperate to leave his mark on a world that barely acknowledges his existence. Travis may wear his isolation proudly, but that doesn’t make it any easier to bear.

Forty years on, ‘Taxi Driver’ remains almost impossibly perfect: it’s hard to think of another film that creates and sustains such a unique, evocative tone, of dread blended with pity, loathing, savage humour and a scuzzy edge of New York cool. Bernard Herrmann’s score sounds like the city breathing, ominous and clammy, while De Niro’s performance is a masterclass in restraint and honesty. Back on the big screen, this is still one of the pinnacles of cinema.

He had the kind of face that no one ever looked at twice, and yet one chilling day, the whole world watched in horror, as he gunned down Gov. George Wallace. That was Arthur Bremer, whose lonely, subterranean existence and hunger for attention appears to have been the main inspiration for a brutally disturbing film, “Taxi Driver.”

For there is very little doubt that the character of Travis Bickle, played so brilliantly by Robert De Niro, was suggested in some degree, by Bremer’s life. Not that Travis has a life to speak of. He avoids personal contacts of any kind, feeling certain he’ll be rejected. His entire world consists of a dreary one-room apartment with only two obvious possessions — an ancient television set and a diary.