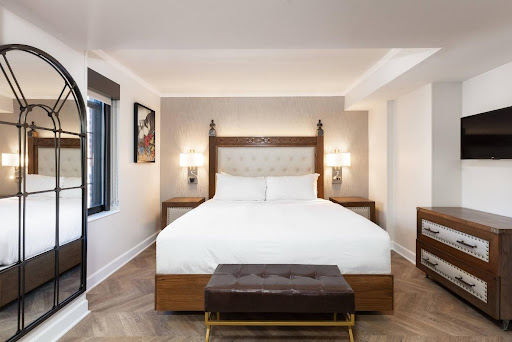 There is so much to see and do in New York City that you have to spend more than a day there just to get started.

That means you’ll need to find some great accommodation to ensure you are safe, comfortable, and well-rested to enjoy your adventures to the utmost.

There are thousands of hotels in and around the city, but if you want to make the most of your time in The Big Apple, it’s the historic hotels in New York City that will appeal.

Not only will you get somewhere great to stay – perhaps with a little luxury thrown in – but you’ll also get to experience a piece of the heart of this iconic city. Read on for some of the best historic hotels in New York City so you can make the best choice.

The Westgate New York Grand Central is one of the best choices when it comes to a historic hotel in New York City.

This hotel is located close to Grand Central Terminal, which is all about history. It’s also in Tudor City, which has a history that links to prospectors, gangsters, and the beginnings of New York City as you know and love it today.

The hotel itself is gorgeous, and the building looks the part. Even better is the fact that you’re close to a number of subway stations and within walking distance of a variety of attractions. With an onsite restaurant, a fitness center, and a business center, this hotel has everything you could ask for. 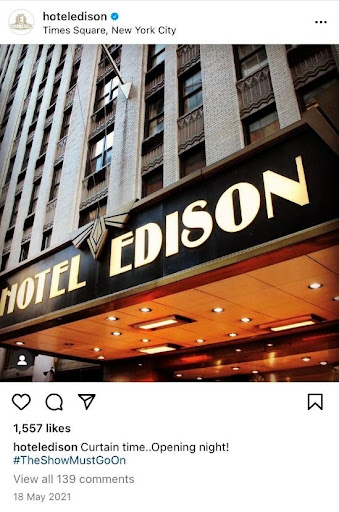 The Hotel Edison is within walking distance of many attractions.

The 790-room Hotel Edison was built in 1931, and it shows that the building is a stunning example of art deco architecture.

The name comes from the fact that Thomas Edison switched on the lights on an opening day via remote control from where he was living in New Jersey at the time! From the Hotel Edison, you can walk to Radio City Music Hall, the Rockefeller Center, and Broadway.

There is a great restaurant on site called Sofia’s, and this is where the scene featuring the loan shark being murdered in The Godfather was filmed. Plus, don’t miss out on afternoon tea in Café Edison, where you can dine in 1930s splendor and gorgeous surroundings. 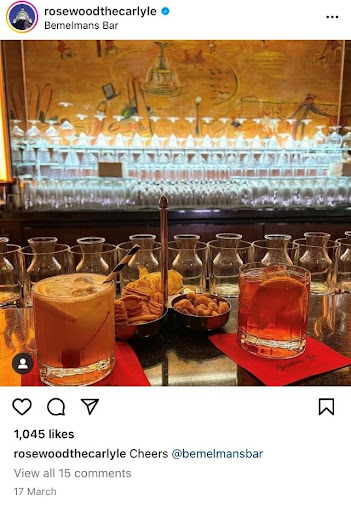 The cocktail bar has a 24-karat gold leaf ceiling.

The Carlyle can be found on New York’s Upper East Side, and all its 188 rooms are decorated in an art deco style, which makes sense as the hotel was originally built in 1930.

JFK used to own an apartment there, and it’s here that Marilyn Monroe used to meet the president using a secret tunnel so she wouldn’t be noticed.

The hotel is 35 stories, and you’ll immediately be impressed as you enter the lobby, which is all black and white marble.

There is a lovely cocktail bar onsite called Bemelmans Bar, which has 24 karat gold leaf on the ceiling. Many celebrities have chosen this spot to call home for a short while, including Jack Nicholson, Sarah Jessica Parker, and Tom Cruise. 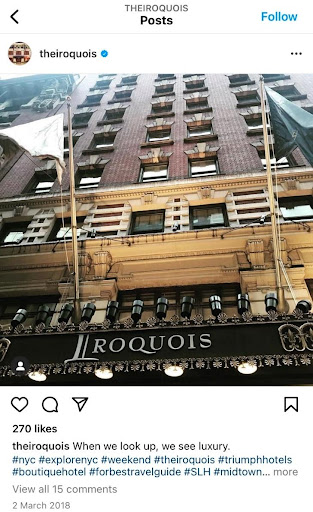 This hotel was James Dean’s home for two years.

The Iroquois is one of the most historic hotels in New York City, built-in 1900. The building is absolutely stunning and denotes a sense of opulence and luxury at first glance.

That feeling is intensified once you get inside and see the amazing lobby with its iconic grandfather clock. There are 105 guestrooms in this hotel, each one individually designed, so even if you stay here multiple times, the chances are you’ll see something different each time.

There are also nine suites, so if you want something a little larger and have the extra cash, why not upgrade? When it comes to history, James Dean lived there – in room 803 – while he was struggling to make it big. Plus, two cocktails were invented there, one of which is called an Iroquois. 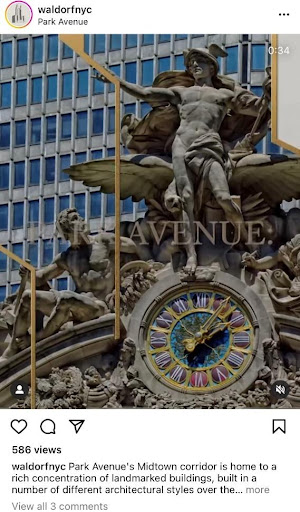 This is where the Waldorf salad was created.

If you think of historic hotels in New York City, it might be the Waldorf Astoria that comes to mind, even if you don’t know what it’s called.

This hotel was owned by William Waldorf Astor and opened in 1893, offering guests plenty of history to go along with the luxury that is sure to be part of your stay.

Although the original hotel actually closed in 1929, it reopened in 1931, and all the same luxury and beauty remained.

Today the hotel retains its original stunning look and feel, but it has been massively extended and now offers 1,416 rooms which include 303 gorgeous suites.

Notable guests include every single American president since Hoover, Queen Elizabeth II, and Frank Sinatra. This is also where the Waldorf salad was created in 1896 by the hotel’s maître d’, Oscar Tschirky. 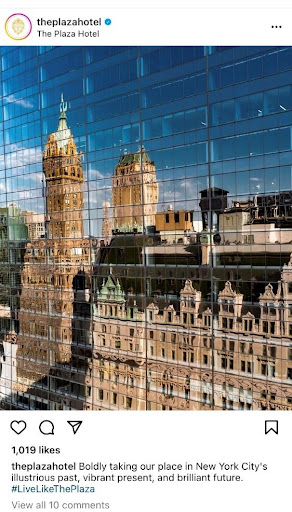 The Terrace Room is where Michael Douglas and Catherine Zeta Jones were married.

There are many historic hotels in New York City, but some truly do stand out, and The Plaza is one of those. It opened in 1907, and at that time, it was described in the media as ‘the greatest hotel in the world’.

Looking at it today, this description still holds true – it is a beautiful building with a lot of history and a lot of elegance.

Designed in the beaux-arts style, the hotel rises 19 stories and has 282 impressive bedrooms that feature Louis XV style beds, Baccarat chandeliers, and plenty of other period furniture and décor.

On top of this, you can opt for one of the 152 apartments, which are rented out on a nightly basis when their owners aren’t in town. 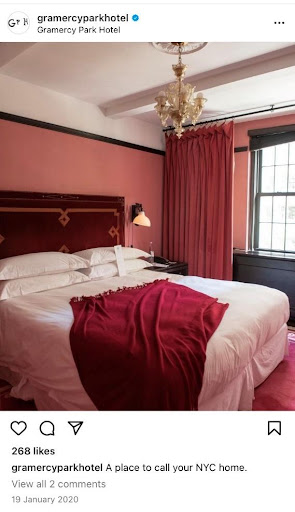 The Gramercy Park Hotel dates back to 1924, and although the hotel – built in the Renaissance revival style and rising up 18 floors – did have some troubles a few decades back, it was bought by Ian Schrager, who, along with Julian Schnabel, a renowned artist, rebuilt the Gramercy Park Hotel and brought it back to its former splendor, making it a perfect example of why historic hotels in New York City need to be preserved.

The décor is amazing, from the black and white tiling in the lobby to the design of the 185 guest bedrooms that incorporate jewels as far as the eye can see. There is art here too, and you can admire pieces by Damien Hurst and Andy Warhol, among others. 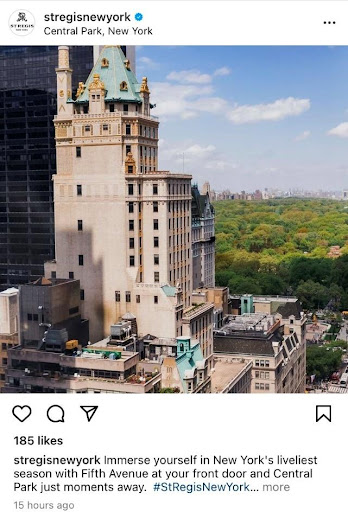 This is where the bloody Mary cocktail was invented, and you can have one in the King Cole Bar.

You’ll spot the iconic St Regis easily. It’s an 18-story hotel designed in the beaux-arts style, and it’s the sister hotel to the Waldorf Astoria we mentioned earlier in the list.

This particular hotel was built by John Jacob Astor IV, cousin to William Waldorf. When it was built, all the guest bedrooms had both telephones and air conditioning, which was something quite unique at the time.

Today these elements still remain, and so do the gorgeous designs and striking gold leaf adornments in the lobby and elsewhere.

You’ll love the marble staircase in the lobby and the chandelier in your room too. Don’t forget to have a Bloody Mary in the King Cole Bar – this is where it was invented by Fernand Petiot, bartender at the hotel in 1934. 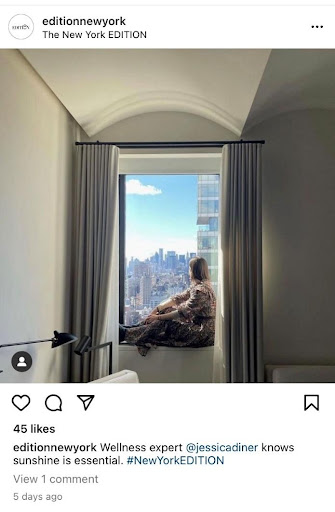 This building has had many lives.

The building that the New York EDITION is housed in was built in 1909 and was originally a clock tower.

It then went on to be the Metropolitan Life Insurance Company’s headquarters and finally became the New York EDITION, a gorgeous hotel and one of the most memorable of all the historic hotels in New York City because it is so large; it was the world’s tallest building until 1913.

There are 243 superb rooms, and if you want to find a great view of the city, you certainly won’t be disappointed; you can see all the way down to Madison Square Park. 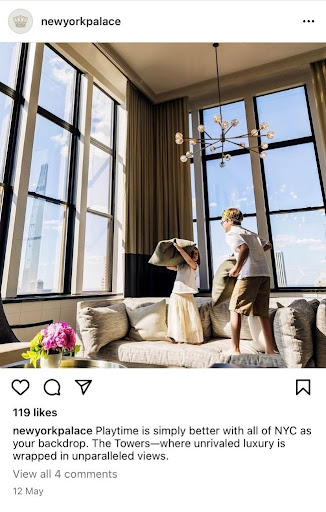 There is a lot of history in this one building.

The Lotte New York Palace is another hotel that was not originally a hotel, but that doesn’t mean it’s not a historic building, and it doesn’t mean there isn’t a fascinating history.

The hotel was once a number of large townhouses built-in 1882. It wasn’t until 1970, when the Archdiocese of New York gave permission for a tower to be built, that we see the beautiful building we have today.

In 1980, the Helmsley Palace opened, and in 2015, the Lotte New York Palace took its place. It is a gorgeous testament to glamor and glitz with some terrific views too.