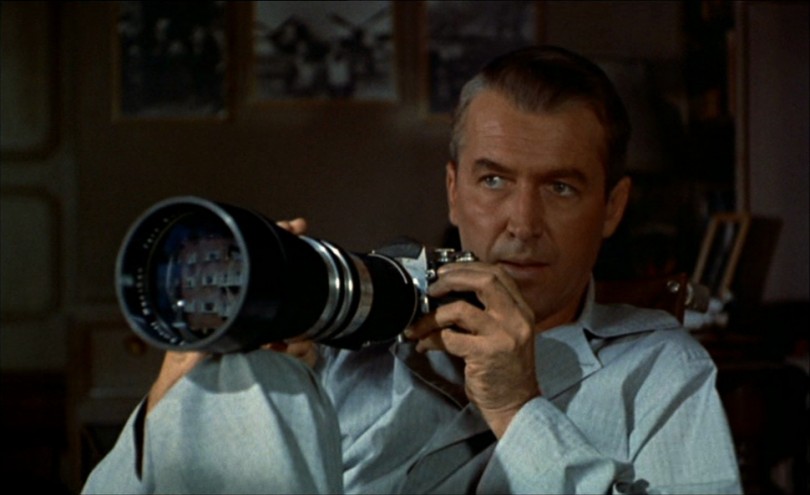 Professional photographer L.B. “Jeff” Jefferies breaks his leg while getting an action shot at an auto race. Confined to his New York apartment, he spends his time looking out of the rear window observing the neighbors.

He begins to suspect that a man across the courtyard may have murdered his wife. Jeff enlists the help of his high society fashion-consultant girlfriend Lisa Freemont and his visiting nurse Stella to investigate.

Rear Window (Paramount), just possibly the second most entertaining picture (after The 39 Steps) ever made by Alfred Hitchcock, is the movie equivalent of what boxing circles call “the handkerchief trick.” The trick, as Philadelphia’s Tommy Loughran used to play it, is simply to plant both feet on a standard-size pocket handkerchief, fold both hands behind the back, and fight a full three-minute round against a free-moving opponent without once taking the feet off the handkerchief.

In Rear Window, Director Hitchcock plants his camera on the esthetic handkerchief of a second-floor back room in.

Layers of psychological awareness betray unassuming audiences of “Rear Window,” and most are not easily disregarded by its three observant main characters either.

There is a disquieting resonance in what their eyes and ears absorb; from an apartment window overlooking a closed courtyard containing numerous dwellings, the busy lives of an assemblage of suburban tenants are seen in full disclosure, as if participants in an intricate stage play of wordless drama.

Some events converge as neighbors interact in passing, while others simply occupy space in peripheral subplots.

They are the kinds of people that do not concern themselves with hiding behind shades or curtains, but does that create a right in others to observe so closely? If some such lives are absorbed by fatal circumstances, is this notion of snooping then justified?

The questions become even more vital once the tone is set by a sardonic massage therapist, who makes a pointed observation in an early scene of the film that seems to reveal the essence of our collective modern standard: “We’ve become a race of peeping toms,” she concedes.

Some years ago when I did a brief stint as a reviewer of movie books, I was handed a fairly weighty tome that proposed to prove that Alfred Hitchcock’s Rear Window (1954) was a “perfect film.” That’s a pretty large claim—especially in my mind, since I’ve always found Hitch’s much-praised 1950s output overrated—but damned if by the end of the book, I couldn’t see the writer’s point.

At the very least, I’d concede that Rear Window is as close to “perfect” as a film is likely to get. This slightly claustrophobic tale—a photographer (James Stewart) confined to a wheelchair with a broken leg takes to spying on his neighbors through his apartment window—afforded Hitchcock the ideal chance to make a completely controlled film. It was similar to the confined single location of Rope (1948), but the elaborate studio set allowed for more movement and variety.

Naturally, being a Hitchcock film, our voyeuristic hero is going to see more than he should. Actually, he witnesses a murder—or what he thinks is a murder—and the more deeply he becomes involved in finding the truth, the more dangerous the game becomes. The structure and approach to it all really is awfully close to flawless. It doesn’t hurt that the film is also very entertaining, very Hollywood glamorous and, yes, ultimately very suspenseful.