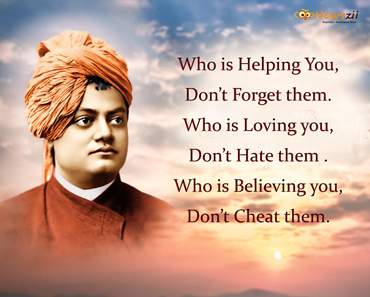 Today is the 154th birth anniversary of Swami Vivekananda, one of India’s most revered spiritual leaders, which is being celebrated as National Youth Day in the country.

Born Narendra Nath Datta in an affluent family and raised in Kolkata, Swami Vivekananda’s life and teachings have always been an inspiration to youth all over the world. Vivekananda was not just an intellectual genius but a spiritual visionary, who taught us how to realise the universal consciousness beyond the limitations of time and space within our own minds and hearts.

Here are 15 quotes by Swami Vivekananda that will inspire you for life: 2. Anything that makes you weak physically, intellectually and spiritually, reject as poison. Swami Vivekananda Motivational quote 3. Talk to yourself at  least  once in a Day.. Otherwise you may miss a meeting with an EXCELLENT person in this World… 5. You have to grow from the inside out. None can teach you, none can make you spiritual. There is no other teacher but your own soul. 6. By the study of different religions we find that in essence they are one. 7. Where can we go to find God if we cannot see Him in our own hearts and in every living being 8. Fill the brain with high thoughts, highest ideals place them day and night before you and out of that  will come great work. 9. Where can we go to find God if we cannot see Him in our own hearts and in every living being. 10. We are what our thoughts have made us; so take care about what you think. Words are secondary. Thoughts live; they travel far. 12. Arise! Awake! and stop not until the goal is reached. 13. The world is the great gymnasium where we come to make ourselves strong. 14. All the powers in the universe are already ours. It is we who have put our hands before our eyes and cry that it is dark. 15. When an idea exclusively occupies the mind, it is transformed into an actual physical or mental state. Swami Vivekananda’s historic speech at the first Parliament of the World’s Religions in Chicago on September 11, 1893 is considered among his most significant contributions to the world. The opening lines of his speech – “Sisters and brothers of America” – earned him a two-minute standing ovation from the audience.