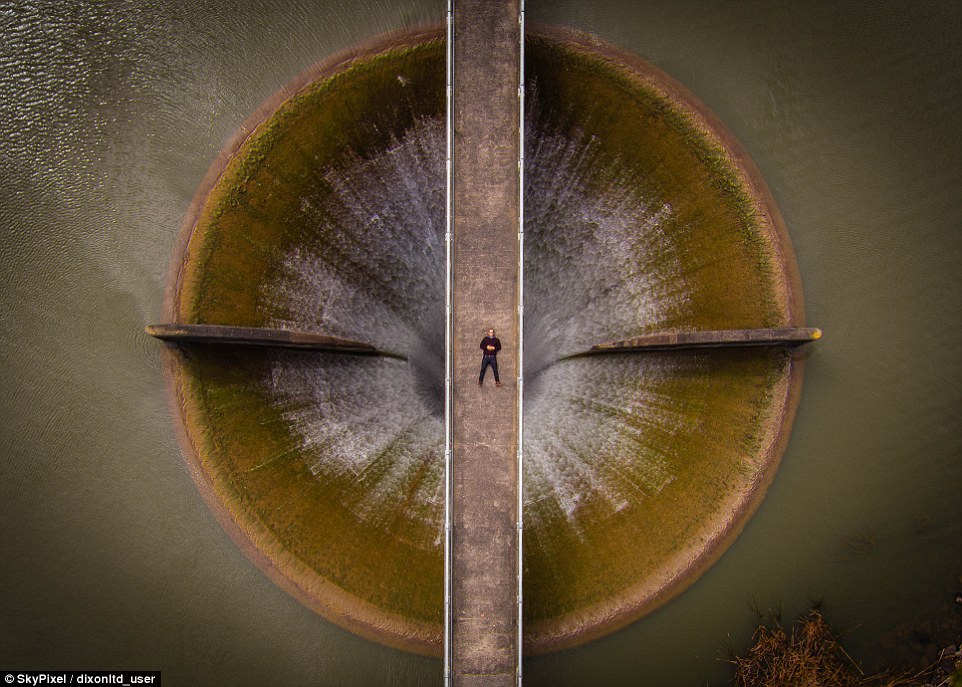 Drone images are pushing the photography bar higher with professionals and amateurs alike capturing new perspectives that reveal the world is even more beautiful from above.

To find the very best aerial imagery of 2016, SkyPixel, a community of over one million aerial photographers and videographers, recently ran a competition, which has picked its winners. And they’re quite simply breathtaking.

A spellbinding capture of a Chinese fisherman, taken in China by Ge Zheng, took the grand prize for Photo of the Year.

A mesmerising image of a camel train snaking across a desert, entitled Exploration, came first in the professional beauty category followed by the ultimate selfie taken in the spillway of a dam in second place and a surreal blue landscape entitled Earth.

From rainbow fields to a vibrant city scene, here are the short-listed pictures, and the winner, that have been shot from the sky.

1. This spellbinding capture of fishing in China – called Fishermen Closing the Net – by Ge Zheng 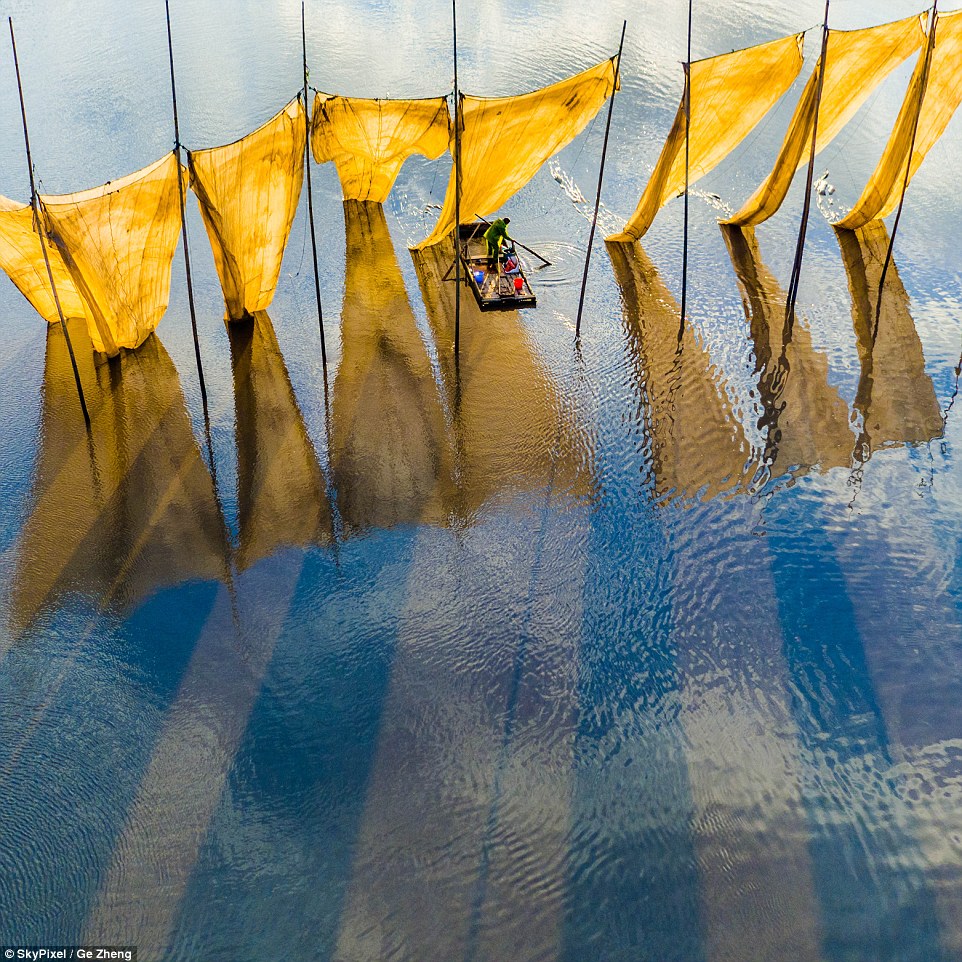 2. This mesmerising image of a camel train snaking across a desert, entitled Exploration, came first in the professional beauty category 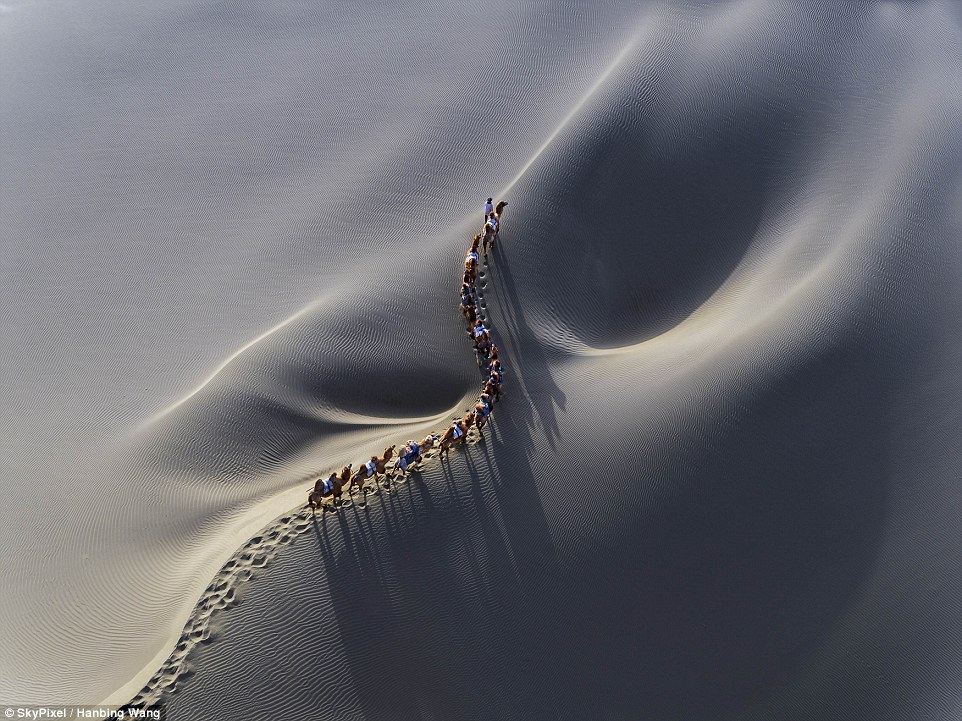 3. The ultimate selfie taken in the spillway of a dam came in second place in the professional category for beauty shots

4. A surreal capture of blue undulating land and a swirling firework, named The Earth, caught the judges’ eyes to secure third place in the professional beauty category 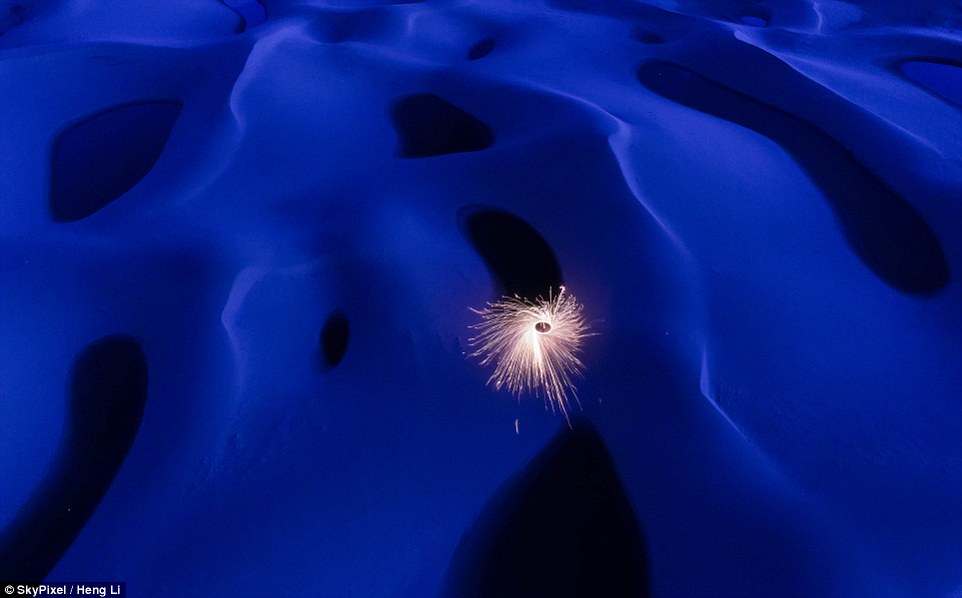 5. First prize in the professional drones in use category for this image of a man leaping gleefully into a lake 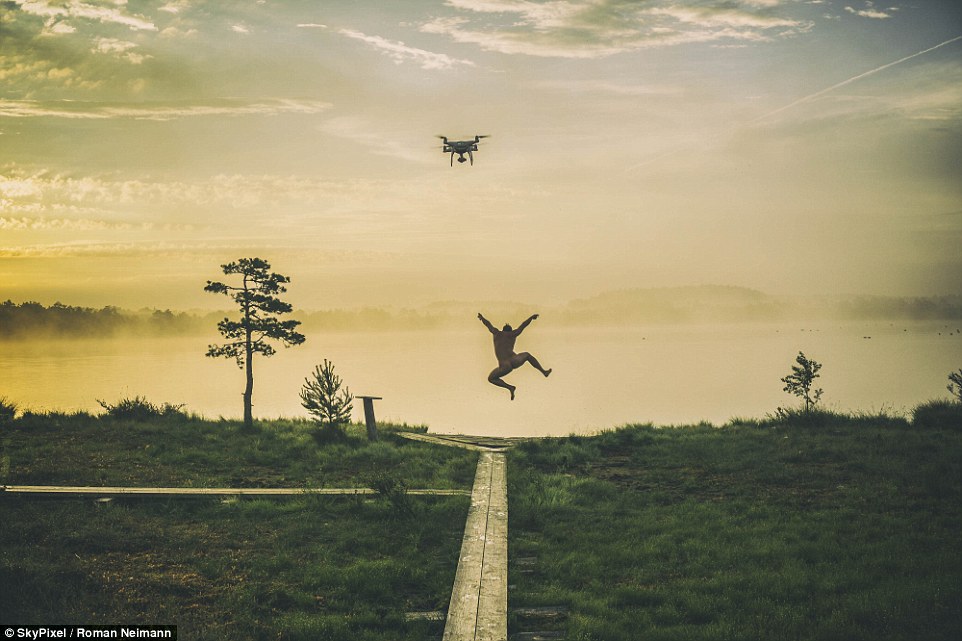 6. A drone lingers over the foggy treetops of the Black Forest in Germany in this third place entry 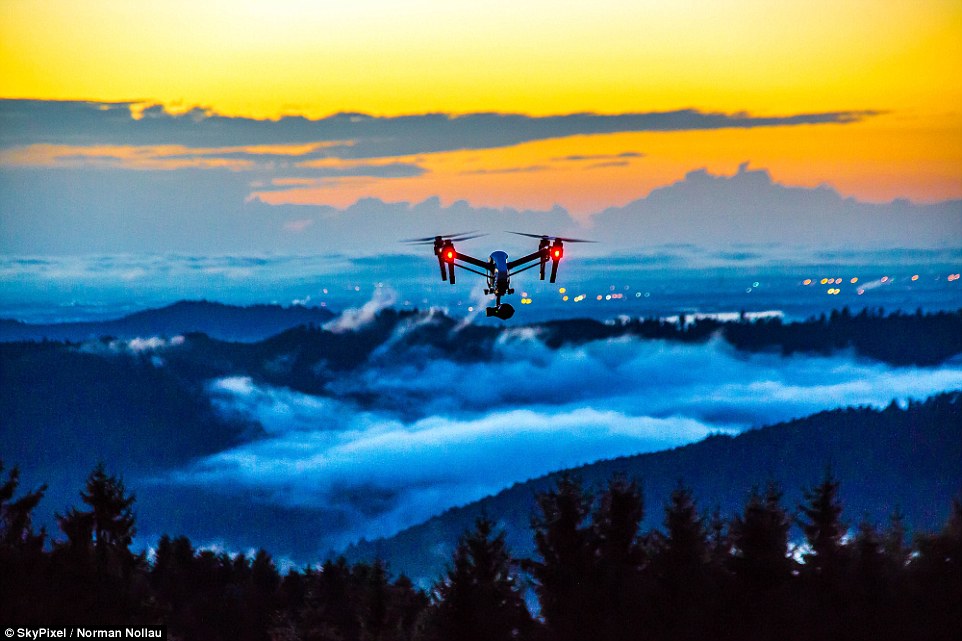 7. A stunning Asian cityscape sparkles in this 360 capture named Starry Night, which was crowned first place in the professional 360 category. 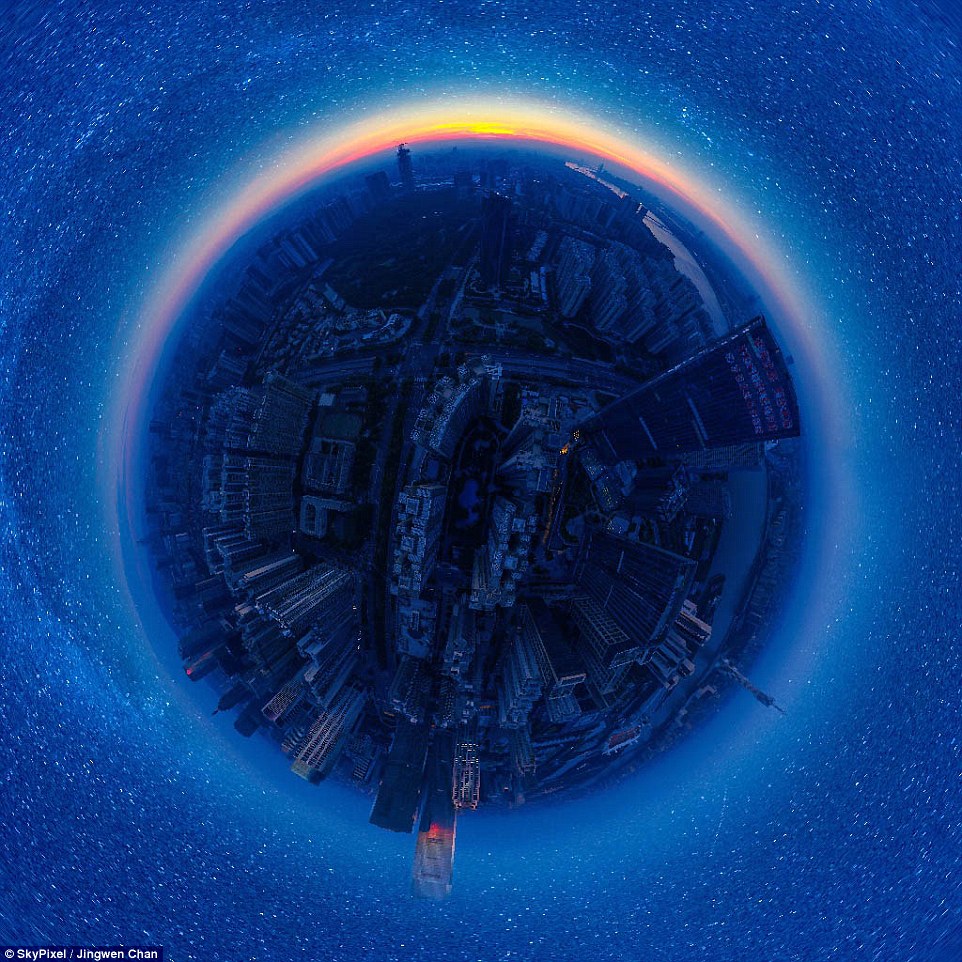 8. The Hidden Lakes of Iceland star in the 360 image that took second place. 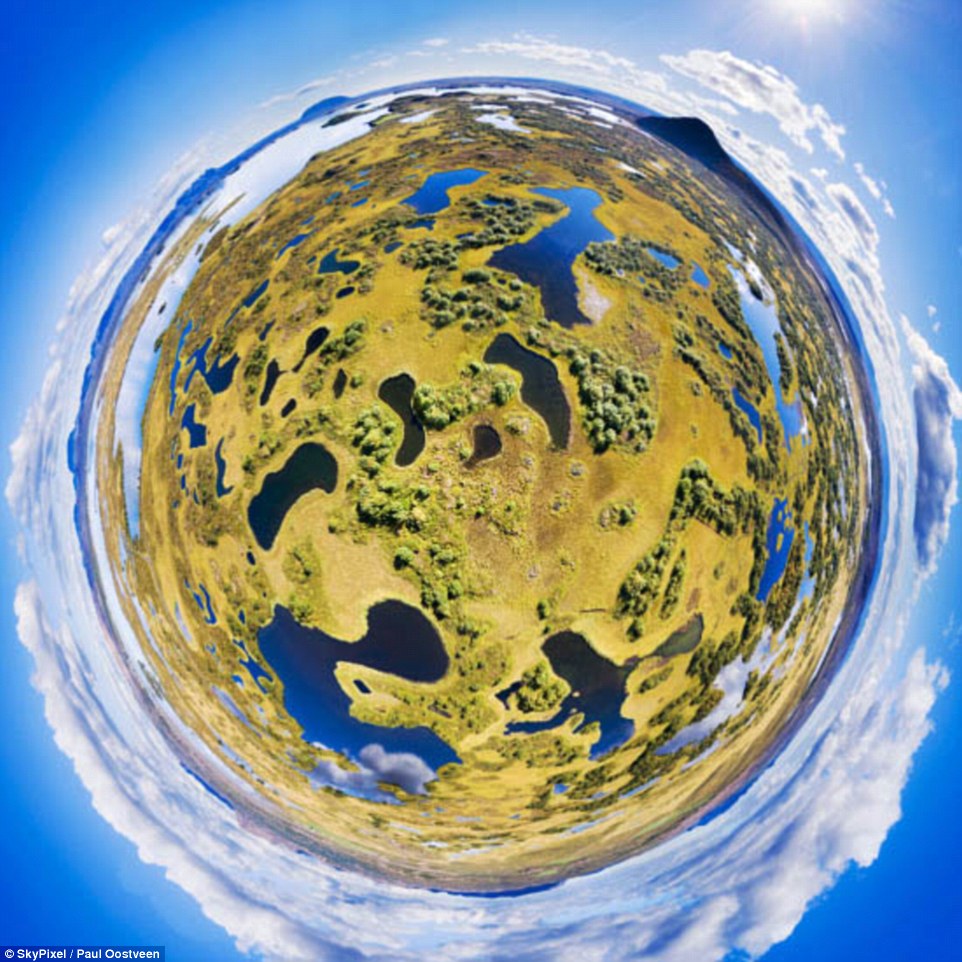 9. China’s colourful rock formations are captured in Sunset in Danxia, which came third in the professional 360 category. 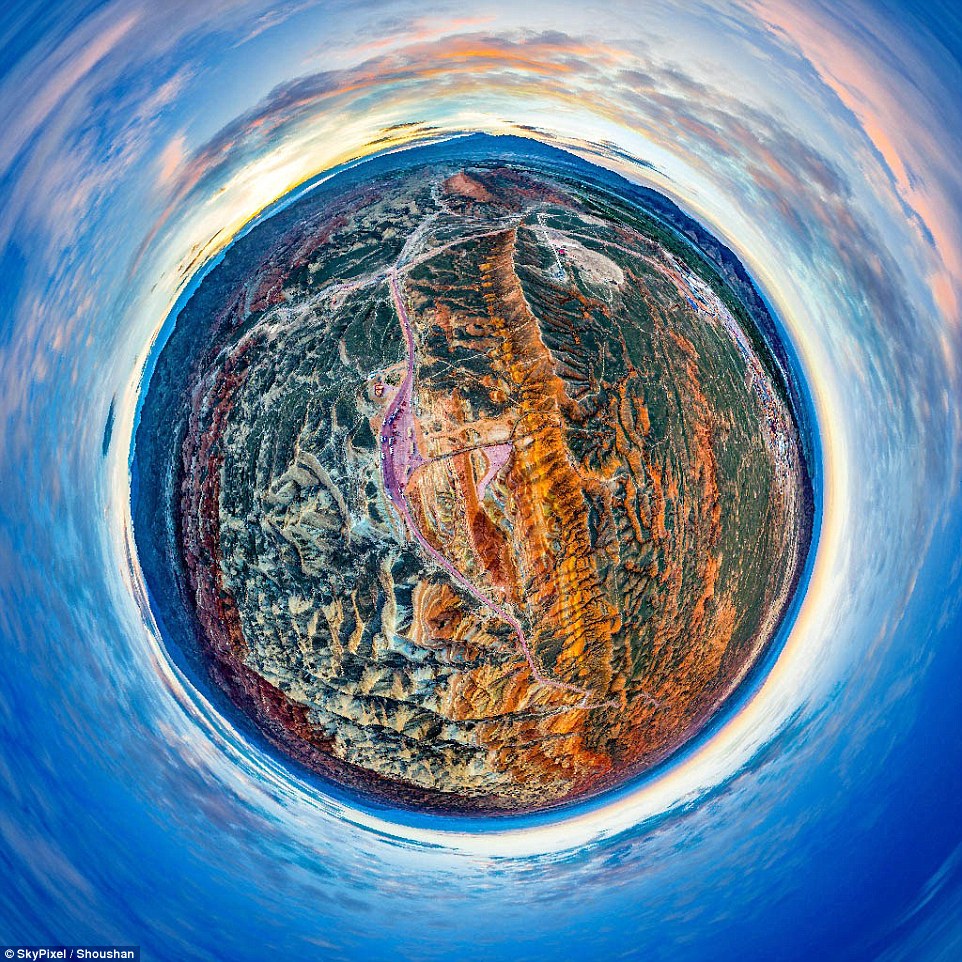 10. This jaw-dropping snap of a motorway bridge shrouded in mist took top prize in the enthusiast beauty category 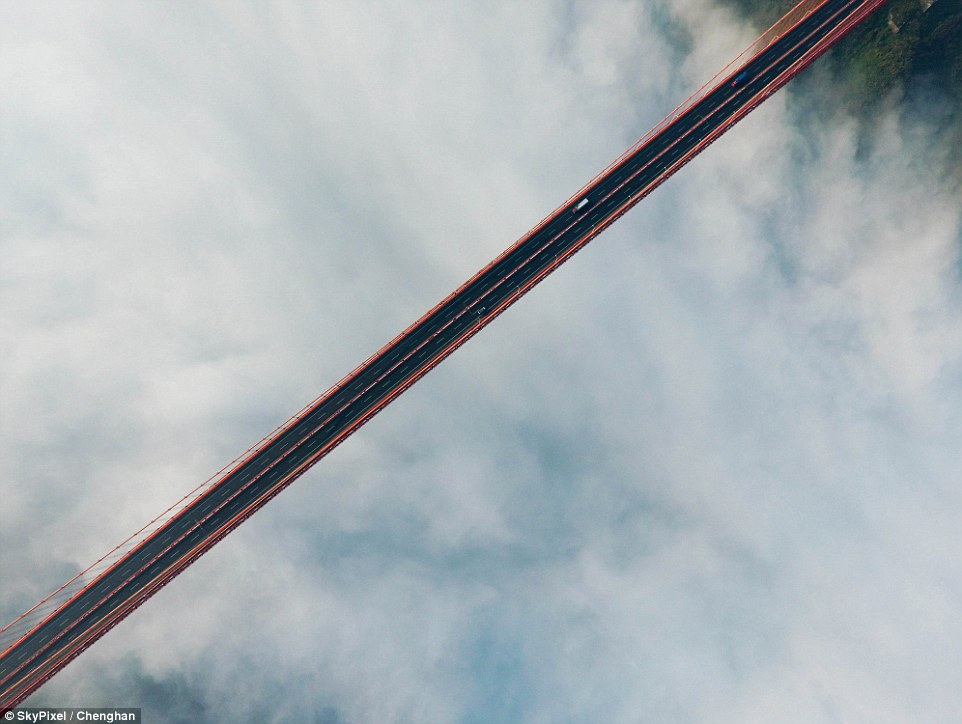 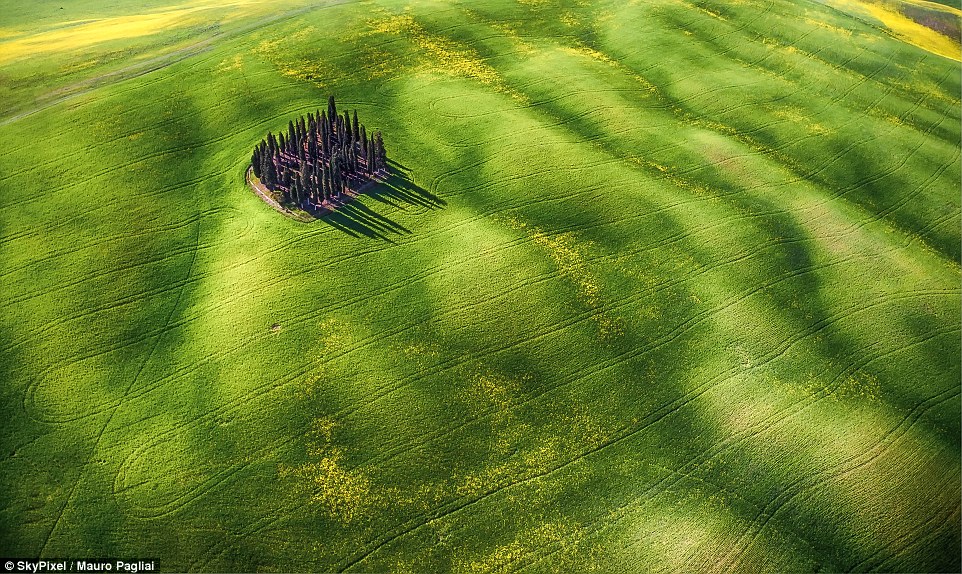 12. The natural beauty of a frozen river in northeast China looks unreal in this shot called Ice River 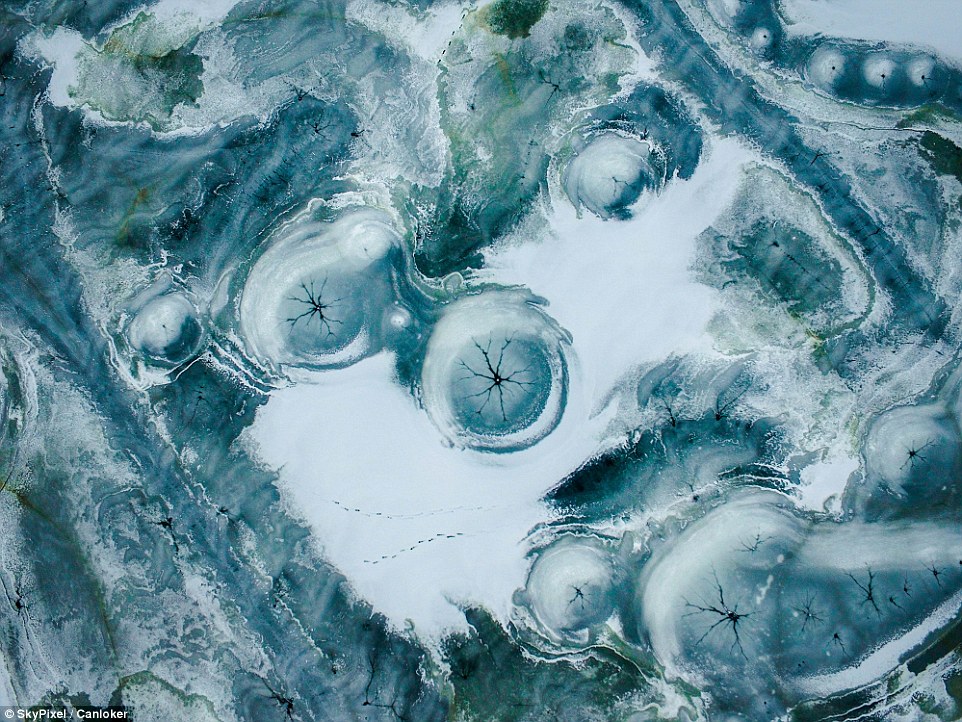 13. The Phantom of the Earth was the name given to this vibrant image of farmland in China. 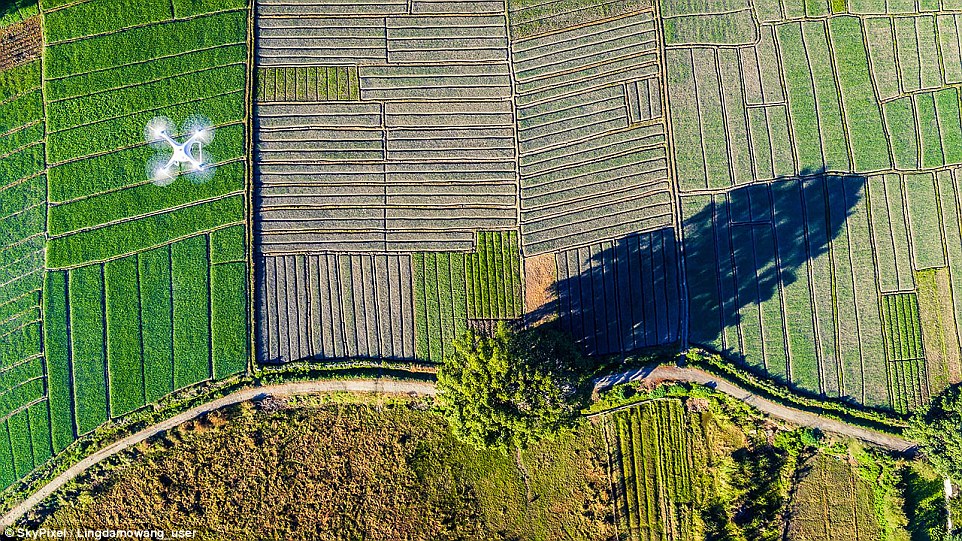 14. Lush green forests and mountain roads are captured through the clouds in a 360 shot named Flying Ink of Tianshan Mountain. 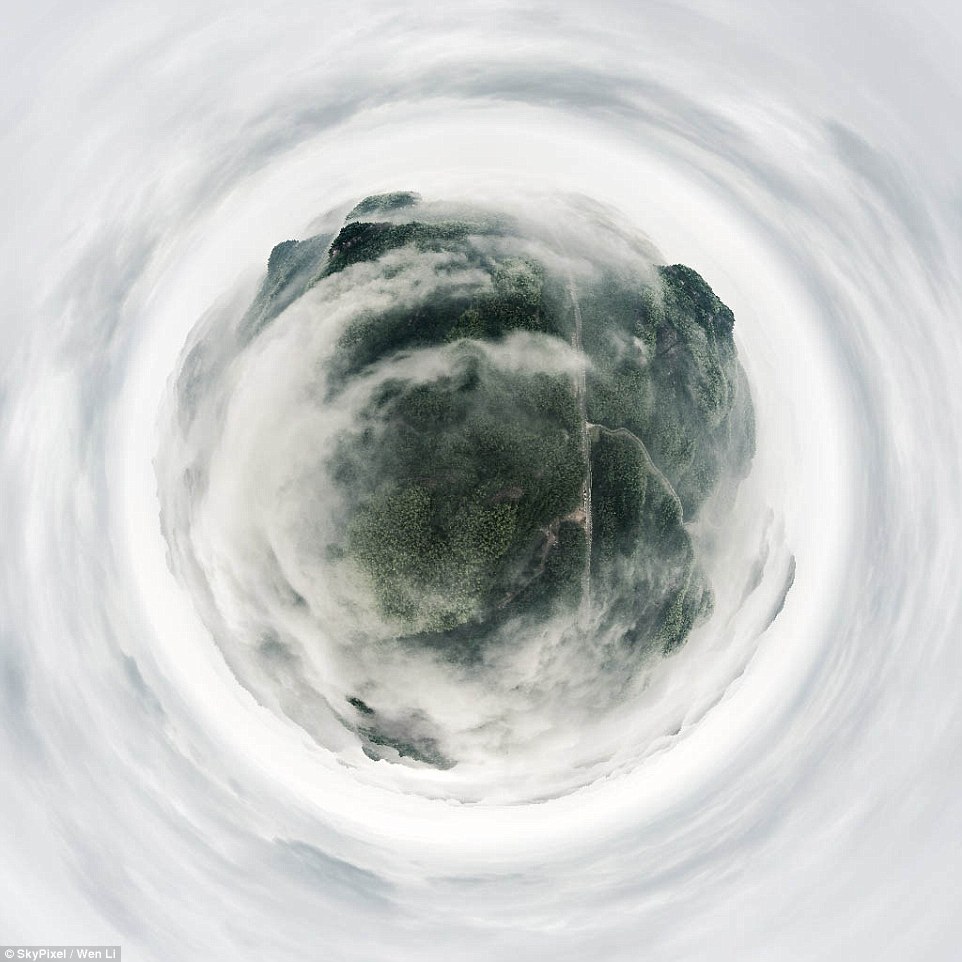 15. The bustling skyscrapers and roads of a city shimmer with activity in this 360 shot, Sunset over Chengdu, which came second. 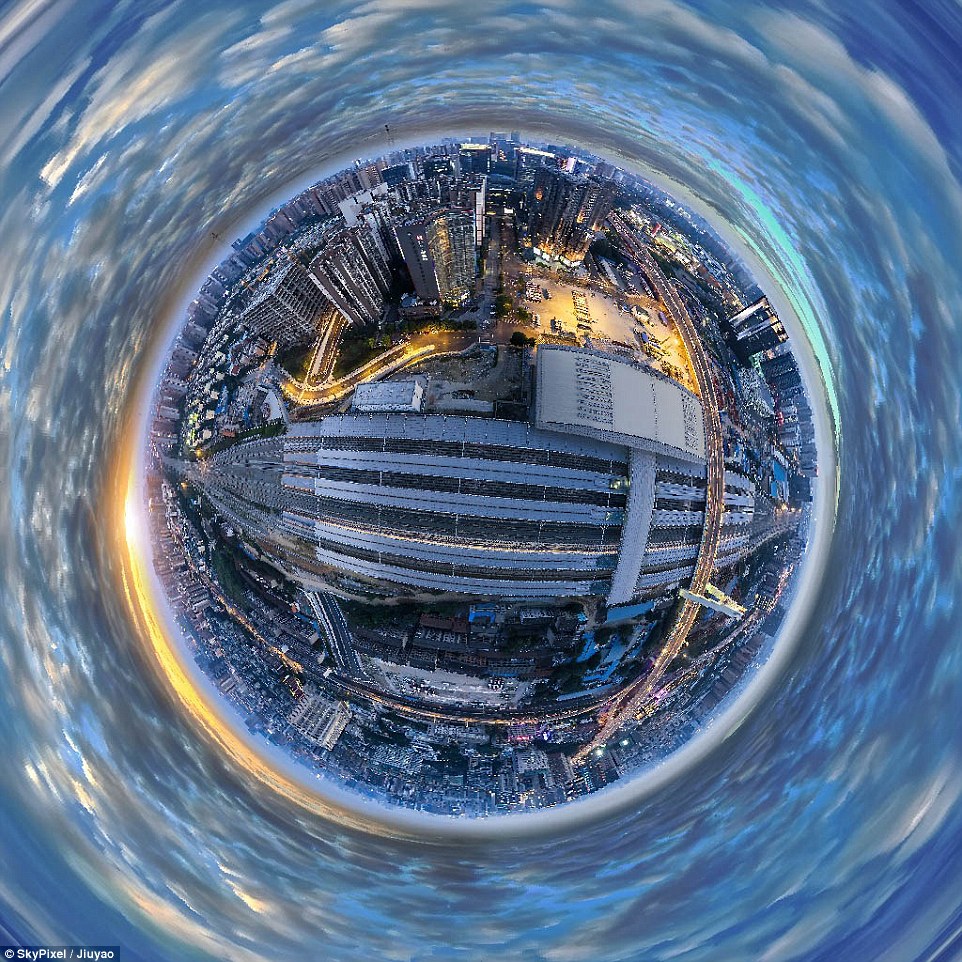 16. The Sea of Clouds in Laojunshan came third. 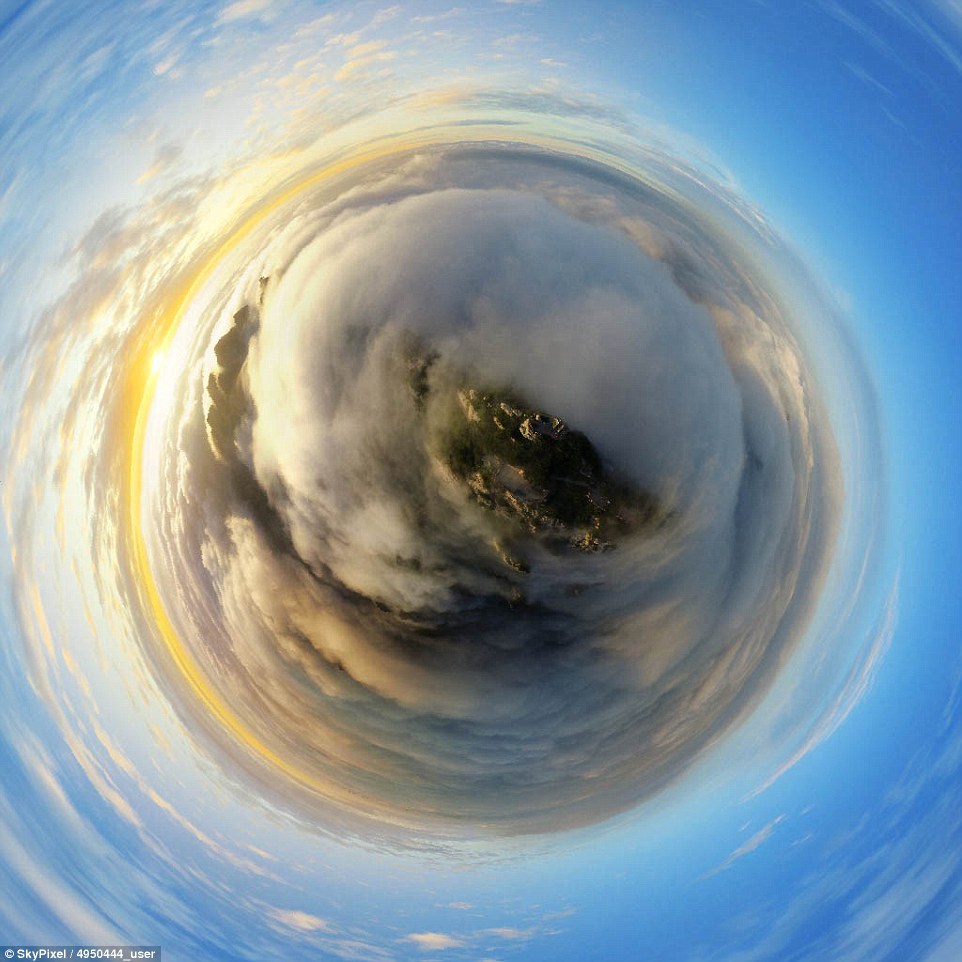