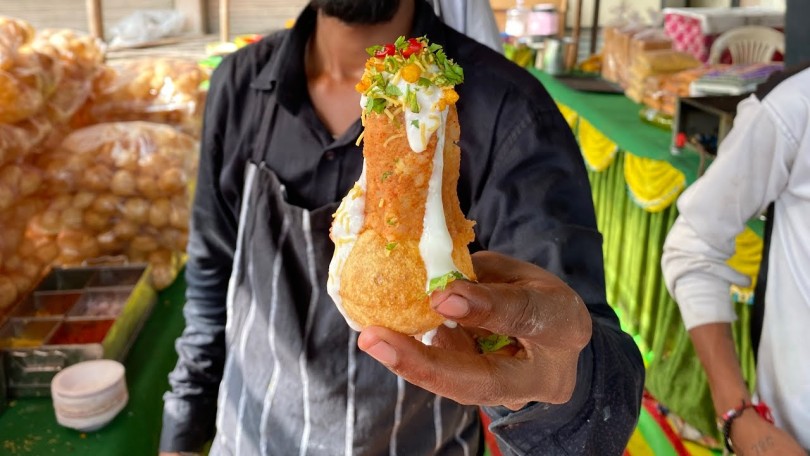 Pani Puri is street food with a huge fan following unlike any other. It doesn’t matter if you prefer to call it Golgappa and Puchka, Batashe or Gup Chup. So many names for the same food are evidence that this chaat food item has been a hit across the entire expanse of India.

Recetly, Pani Puri came into the spotlight when a Bhopal street vendor decided to give the snacks at no cost to all of his customers to mark the birthday of their daughter.

Now, another original Pani Puri is grabbing the interest of the web. The Bahubali Pani Puri from Nagpur, Maharashtra has mesmerised Chaat enthusiasts. We bet you’ll be enthralled too. Check out:

The video was uploaded on YouTube by a popular food writer Laksh Dadwani. The clip from Bahubali Pani Puri is said to have had more than 31 million views. It is one of the top-rated videos trending in India.

The street food vendor that is featured in the clip is Chirag Ka Chaska. He is located in Pratap Nagar, which is in Nagpur. The vendor has been featured in the media several times due to his distinctive and intriguing version of the basic pani puri.

The process of making the Bahubali Pani Puri in Nagpur is fascinating. The meal begins with a big-sized Puri that is then filled with a range of chutneys as well as Pani.

There’s an Imli Chutney, then regular Pani and a seasonal orange-flavored Pani (replaced in summer by Mango in summer), Jeera (cumin) Pani along with Garlic Pani.

The potato filling that is normally stuffed into Pani Puris was stuffed inside. Pani Puri was placed on the top, which was shaped as a massive cylindrical tower. The gigantic Bahubali Pani Puri decorated with boondi, curd sev, the pomegranate that was shelled.

The fascinating Bahubali Pani Puri looked tasty, but it was a bit difficult to eat. “You must also create videos about how to eat this,” commented one user. Another wrote “Can’t believe that there’s a Pani Puri on the planet that isn’t able to be consumed in one go!”