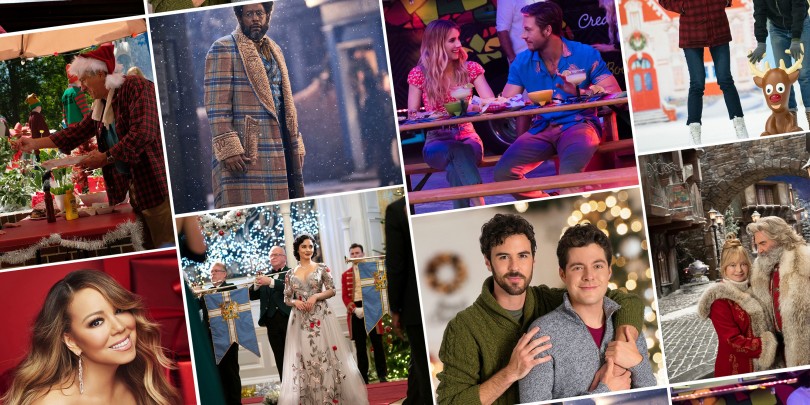 Cynical reporter Charity (Amber Stevens West) gets the opportunity of a lifetime when her boss, Janet (Cheryl Ladd) assigns her to profile Erik Gallagher (Marco Grazzini), a handsome bachelor who organizes millions of dollars to help the less fortunate every Christmas.

Erik claims his charity is all funded by Santa Claus, so Charity’s assignment is to discover where the money really comes from-something other reporters have failed to find out.

Knowing this assignment could make or break her career, Charity is initially frustrated that Erik and his associates reveal hardly any information about his mysterious source of funding.

With her article’s deadline approaching, Charity discovers the real source of Erik’s funding and must decide whether or not exposing the truth is worth ruining her newfound belief in the magic of Christmas and love for Erik.

Congressional aide Erica (Graham) forgoes family Christmas to travel at her boss’s behest. At a beachside Air Force base, she clashes with Capt. Andrew Jantz (Ludwig), who knows her assignment is finding reasons to defund the facility.

But when his trusted apprentice (Keegan-Michael Key) steals his most prized creation, it’s up to his equally bright and inventive granddaughter (Madalen Mills) – and a long-forgotten invention – to heal old wounds and reawaken the magic within.

When Duchess Margaret unexpectedly inherits the throne to Montenaro and hits a rough patch with Kevin, it’s up to her double Stacy to save the day before a new lookalike, party girl Fiona foils their plans.

Vivian, a workaholic television producer, is producing this year’s Country Christmas Live TV show. Gavin, a childhood friend, who manages only the country music star Belinda Manners, arrives from Los Angeles, California, and this dredges up bad memories of their past close friendship.

In the meantime, Marilyn, her late mentor, appears to her and introduces her to Pat, the Ghost of Christmas Past. This then leads to the Spirit of Christmas Present.

He twists her arm to demote Gavin’s star, Belinda, from the show opening song. Will she selfishly pursue ambition over friendship as he did years ago to her, or have all the Ghosts have softened her heart?

An embittered “Scrooge” of a woman plans to sell her small town, regardless of the consequences to the people who live there.

It is their hope that bringing the family together to recreate the Christmas house, will help them find resolution and make a memorable holiday for the entire family and community.

As Brandon and his husband Jake make the trip home, they are anxiously awaiting a call about the adoption of their first child. Meanwhile, Mike reconnects with Andi, his high school sweetheart.

When the world is faced with a holiday cheer crisis, the North Pole knows only one person who can solve it: Santa’s great friend, Mariah Carey.

10. Too Close for Christmas

A woman’s feelings start to change when she reluctantly spends Christmas with the man responsible for ending her last relationship.

11. Time for Us to Come Home for Christmas

Five guests are mysteriously invited to an inn to celebrate Christmas. With the help of the owner Ben, Sarah discovers that an event from the past may connect them and change their lives forever.

Holly, a jewelry designer finds a lost charm bracelet and teams up with investigative reporter Greg in hopes of finding the owner and returning it by Christmas Eve.

13. A Christmas for Mary

As they enjoy the local holidays together, Hugo and Patrick’s attraction to each other is undeniable but as Hugo receives word of a big promotion requiring a move to London, he must decide what is most important to him.

Meeting your girlfriend’s family for the first time can be tough. Planning to propose at her family’s annual Christmas dinner – until you realize that they don’t even know she’s gay – is even harder. When Abby (Kristen Stewart) learns that Harper (Mackenzie Davis) has kept their relationship a secret from her family, she begins to question the girlfriend she thought she knew.

Emily is the top newscaster who has achieved her dreams but has regrets about the guy who got away five years earlier. When the Christmas carnival comes to town, a ride around the carousel takes her magically back in time to the carnival five years before… giving her a second chance at love before she must return to Christmas present.