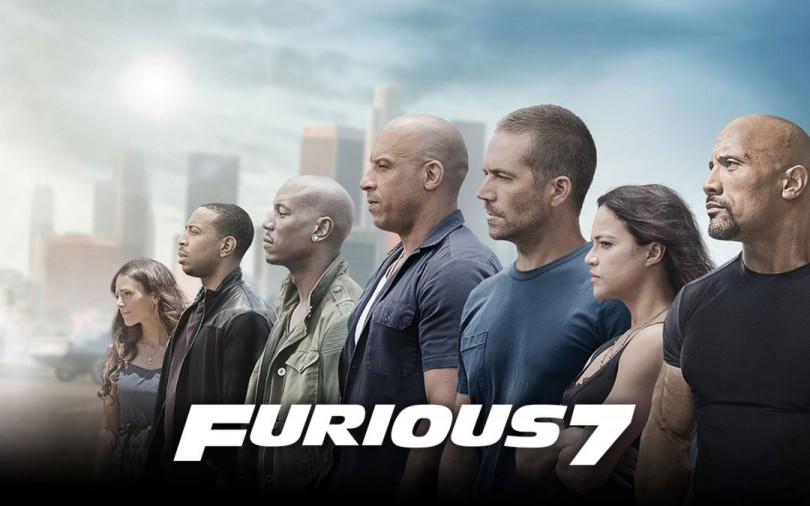 Dominic and his crew thought they’d left the criminal mercenary life behind. They’d defeated international terrorist Owen Shaw and went their separate ways. But now, Shaw’s brother, Deckard Shaw, is out killing the crew one by one for revenge. Worse, a Somalian terrorist called Jakarde and a shady government official called “Mr.

Nobody” are both competing to steal a computer terrorism program called “God’s Eye,” that can turn any technological device into a weapon. Torretto must reconvene with his team to stop Shaw and retrieve the God’s Eye program while caught in a power struggle between the terrorist and the United States government.

This gleefully kinetic installment of the paramilitary-motors franchise pulls a deep bromantic strain from the real-life drama of its production—the death, midway through filming, of its co-star Paul Walker. He plays Brian, a vehicular warrior who is married to Mia (Jordana Brewster), the sister of his partner-in-arms, Dom (Vin Diesel). The partners are mobilized again—together with the martial artist Letty (Michelle Rodriguez), who is Dom’s wife; the class clown Roman (Tyrese Gibson); and the tech wiz Tej (Ludacris)—to combat a double-barrelled assault. The evil Deckard Shaw (Jason Statham) is trying to kill them, and his partner-in-terror, Jakande (Djimon Hounsou), has kidnapped the hacker Ramsey (Nathalie Emmanuel), whose “God’s eye” gizmo can track them across the globe. The federal government—represented by the helmet-coiffed Mr.

Nobody (Kurt Russell)—kicks in some equipment, and the chase begins, taking the heroes from Los Angeles to the Caucasus Mountains and Abu Dhabi and back. Along the way, they achieve the impossible with vertiginous style, blending NASCAR maneuvers with demolition-derby impact, special-forces exploits with acrobatic aplomb. The director, James Wan, sends cars repeatedly airborne and seems himself to marvel at the results; the movie’s real subject is the stunt work, but its stars’ authentic chemistry lends melody to its relentless beat. The wreckage of cities is just a backdrop for the thrill of hard-won victory and the familial bonding that results. Co-starring Dwayne (The Rock) Johnson, swaggering jovially.

At the end of The Fast and the Furious, Brian (Paul Walker) gives former enemy Dom (Vin Diesel) a car so he can drive alone into the sunset. Fourteen years and six films later, there’s precious little alone time for the Furious clan. This lucrative franchise has so many recurring characters that they really should trade in their muscle cars and charter a team bus.

Overpopulation worthy of an X-Men flick is just one pothole for Furious 7, which at 137 minutes also suffers from bloating and repetition. Yet the first movie in the series to be directed by Saw’s James Wan is as zippy, playful and amiably preposterous as the best of the previous models. The filmmakers even finesse the most conspicuous problem: Walker’s November 2013 car-crash death, which occurred midway through the shoot.

We’ll get to the serious stuff, but first let’s appreciate what a dopey, joyous wonder this film franchise has become. What began almost quaintly small-scale in the first film—drag racing SoCal rough riders who stage nighttime raids on freight trucks—has ballooned into a never-ending global melee. Diesel’s Dominic Toretto and his crew, which includes Walker’s Brian O’Conner and Michelle Rodriguez’s Letty Ortiz, among many others, have become international mercenaries of a sort, a family that works for itself but is inevitably swept up in some kind of larger intrigue. Why a gang of gearheads from the wilds of Los Angeles would be so routinely involved in, and capable of navigating, such high-stakes adventures isn’t worth thinking about. The F&F movies long ago skipped the realm of plausibility or reason.