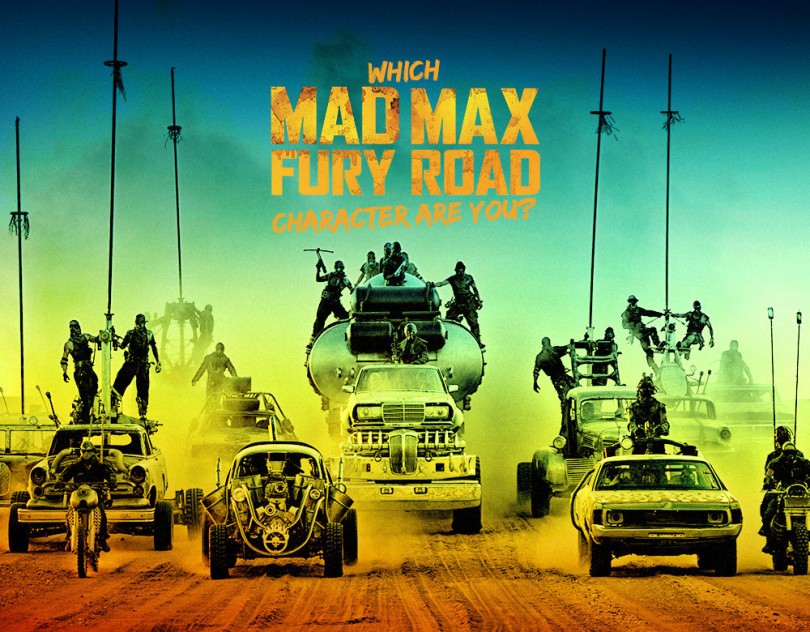 An apocalyptic story set in the furthest reaches of our planet, in a stark desert landscape where humanity is broken, and almost everyone is crazed fighting for the necessities of life. Within this world exist two rebels on the run who just might be able to restore order.

There’s Max, a man of action and a man of few words, who seeks the peace of mind following the loss of his wife and child in the aftermath of the chaos. And Furiosa, a woman of action and a woman who believes her path to survival may be achieved if she can make it across the desert back to her childhood homeland.

The world has totally gone to hell in Mad Max: Fury Road, and goddamn, does it look great. It’s fitting that a week before the arrival of Tomorrowland, Brad Bird and Damon Lindelof’s earnest argument in favor of hopeful futurescapes, the face-melting fourth installment to George Miller’s franchise is gunning into theaters to suggest there’s nothing like the flame-out of humanity for unprecedented spectacle. The movie makes a fume-drunk, totally convincing case for how thematically lavish and awesome-looking the apocalypse can be, as long as you don’t have to live there.

It’s not necessary to have seen the early Mad Max movies to get the gist of where things lie in the indeterminate future of Mad Max: Fury Road, though it’s funny to look back at the Australia of the first installment and remember that it had diners and a court system and that its main character had something terrible happen to him while on vacation. Fury Road is so beyond those trappings of civilization that it’s practically alien, taking place on an Earth that’s all wasteland, a desiccated, dusty stretch as far as the eye can see. What survivors are left prey on one another out on the open road or by way of tyrannical tribal societies.

Mad Max: Fury Road delivers. There’s no clearer or a more succinct way to put it. 30 years after last appearing on the big screen, Max roars back with a vengeance. Part reboot, part sequel, and part something entirely different, Fury Road takes us on a trip that is both like and unlike the earlier excursions.

George Miller uses a new cast and a sizeable budget to deliver the Mad Max film he always wanted to make but was never quite able to. Talk about taking things to a new level… Theaters showing Fury Road should have seat belts installed.

The three-decade gap between Mad Max Beyond Thunderdome and Fury Road was more a product of circumstances than a lack of effort on Miller’s part. During the hiatus, he tried numerous times to get the project started but issues related to Mel Gibson’s rise (and later fall) as Hollywood’s biggest star and problems with finding a location kept the picture on the shelf after several mis-starts.

One can make a compelling argument that the movie may have been helped by the long delay – not only did it allow a younger man (with less baggage) to take over the lead but it gave Miller more time to refine the “spectacle” aspect which, in the final analysis, is by far Fury Road’s biggest selling point.

Even after two viewings, I feel as though I’ve only scratched the surface of Mad Max: Fury Road. George Miller’s action fantasy is astonishingly dense for a big-budget spectacle, not only in its imagery and ideas but in the complex interplay between them (Chicago Tribune critic Michael Phillips has aptly likened the movie to a symphony). In a sense, Fury Road has been gestating since the late 1970s when Miller first envisioned the character of Mad Max and the nightmarish future Australia he inhabits.

The movie builds upon motifs from Miller’s original trilogy with Mel Gibson—Mad Max (1979), The Road Warrior (1981), and Mad Max Beyond Thunderdome (1985)—though it’s not a sequel but a complete reimagining of the world in those films. Miller began planning this fourth installment as far back as 2001 and claims to have generated so much material during the unusually long pre-production phase that he already has a couple more stories ready to go.