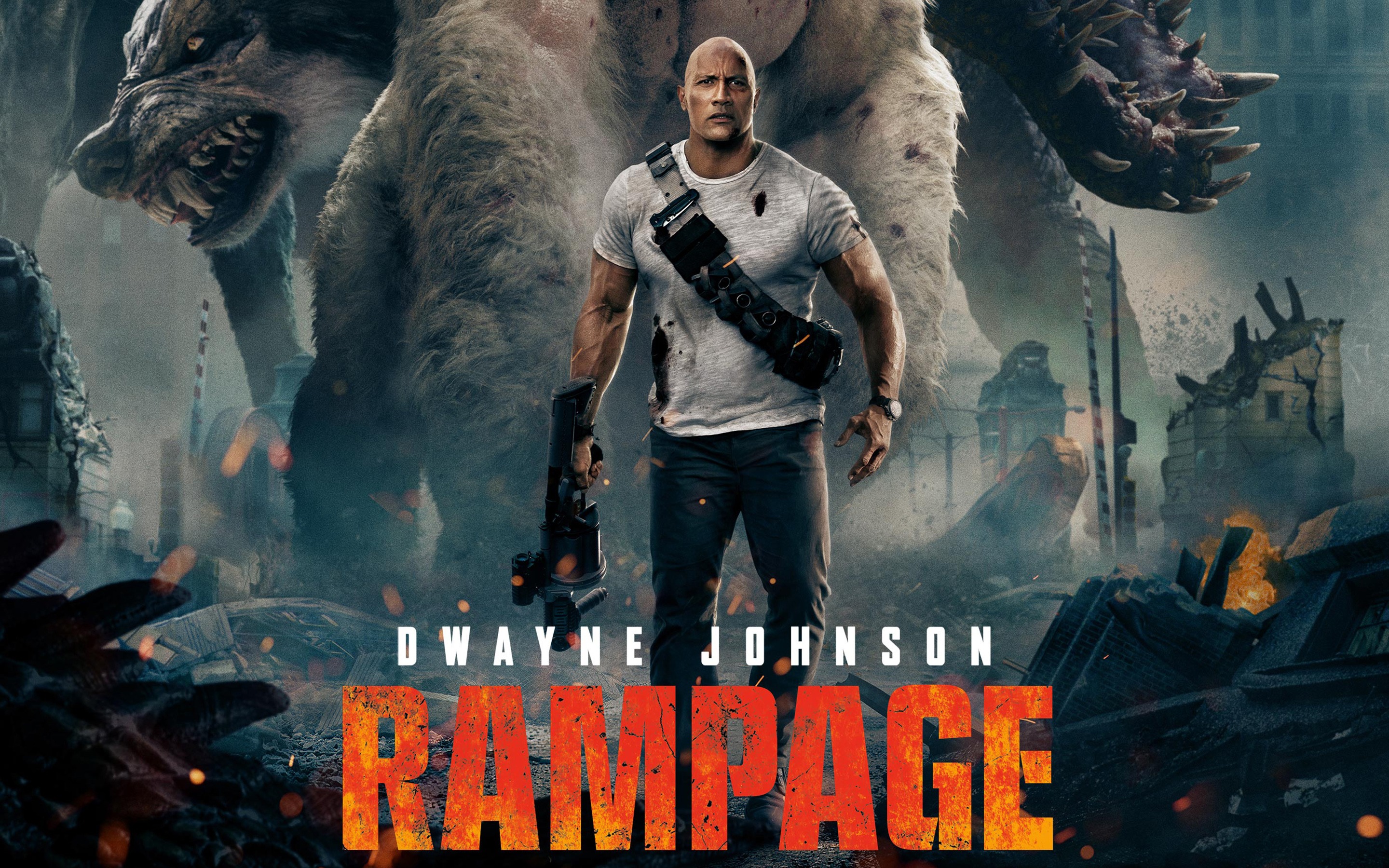 When three different animals become infected with a dangerous pathogen, a primatologist and a geneticist team up to stop them from destroying Chicago.

Primatologist Davis (Dwayne Johnson) shares an unshakable bond with George, the extraordinarily intelligent silverback gorilla who has been in his care since he was young.

When a greed-fueled corporation’s genetic experiment goes awry, George and other animals across the country are mutated into aggressive super creatures who destroy everything in their path.

In this adrenaline-filled ride, Davis tries to find an antidote, not only to halt a global catastrophe but also to save the fearsome creature who was once his friend.

The Rampage game summons players to do battle with three digital giants — a gorilla, a werewolf and a Godzilla-ish lizard — that are chowing down on people while smashing up cities and skyscrapers. Rinse and repeat.

The film version, written by four dudes who probably squandered a lot of quarters as teens, keeps the digital critters, which are now more convincingly fake thanks to CGI advancements. Johnson and other Hollywood stars play real humans, although the ridiculous dialogue — “This is gonna get ugly!” Johnson shouts, as he surfs a broken helicopter atop a collapsing building — makes them sound like cartoon characters.

There’s a scene in Rampage, the latest movie adaptation of an old-ass – sorry, “vintage” – video game, in which an albino silverback gorilla named George flips the bird at Dwayne “The Rock” Johnson. How did this great ape know exactly what we were thinking? Look, we’re willing to cut Johnson a lot of slack: His recent Jumanji reboot was genuine fun, and the man kills it in the Fast & Furious franchise.

Even when his movies suck (hello, Baywatch), the former wrestler can run a charm offensive against crappy filmmakers and crappier computer effects. The hope was that Rampage would fall into the category of San Andreas – a Rock paycheck toss-off that might not be worth the steep price of a movie ticket but goes down easy later when you stream it at home with beer and pizza.

Dwayne Johnson finally gets a star to match his size if not charisma in the sometimes gloriously ludicrous “Rampage,” a movie based on a hit arcade game that was literally just larger-than-life monsters bashing buildings. If you’re thinking, “Wow, that seems like a flimsy premise from which to adapt a feature film,” you’re not entirely wrong. Directed by “San Andreas” helmer Brad Peyton, this CGI blockbuster is often a defiantly stupid movie, most comfortable with what it’s trying to accomplish when giant monsters are destroying half of downtown Chicago or leaping on moving helicopters.

It’s the narrative tissue in between that allows the movie magic to falter every now and then. However, when Johnson is doing that movie action star thing he does so well and giant animals are going enormous-mano-a-enormous-mano, there’s undeniably goofy fun to be had. You just have to be patient during the downtime.