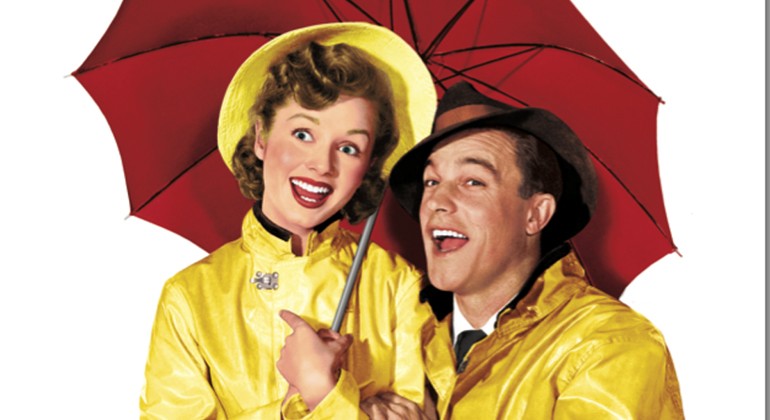 1927 Hollywood. Monumental Pictures’ biggest stars, glamorous on-screen couple Lina Lamont and Don Lockwood, are also an off-screen couple if the trade papers and gossip columns are to be believed.

Both perpetuate the public perception if only to please their adoring fans and bring people into the movie theaters.

In reality, Don barely tolerates her, while Lina, despite thinking Don beneath her, simplemindedly believes what she sees on screen in order to bolster her own stardom and sense of self-importance.

R.F. Simpson, Monumental’s head, dismisses what he thinks is a flash in the pan: talking pictures.

It isn’t until The Jazz Singer (1927) becomes a bona fide hit which results in all the movie theaters installing sound equipment that R.F. knows Monumental, most specifically in the form of Don and Lina, have to jump on the talking picture bandwagon, despite no one at the studio knowing anything about the technology.

Watch Trailer Of Movie “Singin’ In The Rain” Here

Movie Reviews: “Singin’ In The Rain”

Gene Kelly’s “Singin’ in the Rain,” together with the Radio Music Hall’s widely famed annual pageant, “Glory of Easter,” is tops in town holiday entertainment for the family trade.

“Singin’ in the Rain” is another mighty fine MGM Technicolor musical comedy produced by Arthur Freed whose “An American in Paris” copped seven Academy awards last week, including Best Picture of 1951.

Mr. Freed knows what audiences want and he gives it to them. As usual, in “Singin’ in the Rain” he gives us entertainment, something to look at, a lot to laugh at and good music to listen to, something to lose ourselves in.

And something for us old timers to reminisce over in the songs and type of entertainment that looks as though it came out of MGM’s first big talking musical, “Broadway Melody.”

One of the shining glories of the American musical, this 1952 feature was fabricated (by screenwriters Betty Comden and Adolph Green) around a collection of old songs written by producer Arthur Freed and brought to bright, brash, and exuberant life by directors Stanley Donen and Gene Kelly.

The setting is Hollywood’s troubled transition to sound, and there is just enough self-reflexive content (on the eternal battle between illusion and reality in the movies) to structure the film’s superb selection of numbers.

The tone ranges from the lyrical (the title number) to the burlesque (“Moses Supposes”) to the epic (“Broadway Melody”), but through it all runs a celebration of movement as emotion. Kelly’s costars include Donald O’Connor, Debbie Reynolds, Jean Hagen, Millard Mitchell, Cyd Charisse, and Rita Moreno.

Singin’ in the Rain is a difficult case, being an old movie about old movies. Gene Kelly plays Don Lockwood, a silent star of the late Twenties, given a strong jolt by what looks like a fleeting fad, but turns out to be a new art form talking pictures.

He has to reshape his career and learn new skills overnight, as do his friend Cosmo Brown (Donald O’Connor) and co-star Lina Lamont (Jean Hagen).

Lina, the blonde bombshell with extra shrapnel, has a big problem with the new regime up to now she has mouthed mute nothings, and loyal fans are about to discover she sounds like Tweetie-Pie being plucked alive.

Enter the dubber, Kathy Selden (Debbie Reynolds), who is also the new contender for Don’s heart.