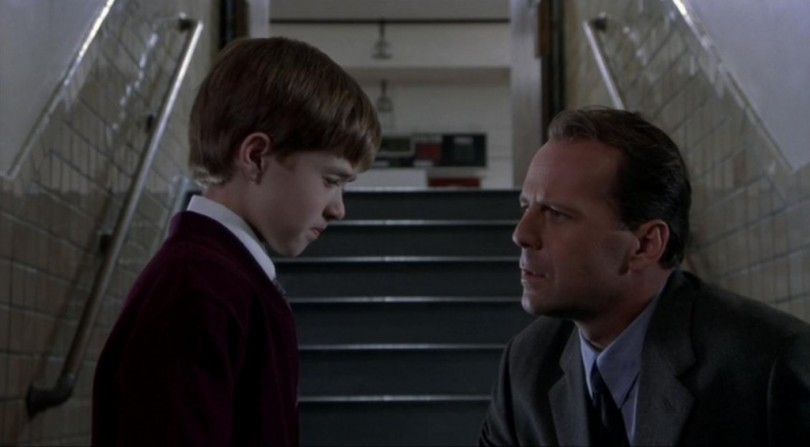 To wipe the slate clean and get a chance to redeem himself after that soul-scarring incident one year ago, the Philadelphia child psychologist, Dr. Malcolm Crowe, decides to take on his first new case–the profoundly troubled eight-year-old, Cole Sear.

Exhibiting the same symptoms as a former patient, Cole goes one step further by solemnly claiming he has the gift–or curse–of a rare, yet unwelcome sixth sense; the mysterious ability to see the dreadful and unquiet specters of the deceased who linger in this earth.

However, can a slowly-recovering skeptic believe–let alone, heal–a desperate soul crying for help? And what if Cole’s disturbingly recurring apparitions are not figments of an injured fantasy, but an irrefutable reality?

Some movies do the twist. They stand or fall on their endings. They have no content except for the last big reversal. They twist the night away.

So when I say that the ending of writer-director M. Night Shyamalan’s “The Sixth Sense” knocked me out of both socks, and I loved that pure moment of revelation, you must bear in mind that – hard as it is to recall now – for the first hour and a half it depressed me.

Is Bruce Willis in danger of being typecast as the intense academic psychologist? Having already played one in The Color of Night (1994), he revisits this persona in The Sixth Sense, a paranormal chiller which has had them gibbering with fear in the aisles in the US. This is a conventional horror movie with all the trimmings: a kind of stadium act, compared with the unplugged, acoustic set offered by The Blair Witch Project.

Willis is Dr. Malcolm Crowe, a child psychologist dealing with a profoundly disturbed little boy, Cole (Haley Joel Osment) who claims that he can see “dead people”. At first skeptical, Dr. Crowe gradually comes to believe that little Cole can indeed commune with the unquiet souls, who are reaching out to him for help. And, yes, the scenes where Cole does so can be very creepy indeed.

But there is a strange tinge of schmaltz which begins to ooze out like ectoplasm towards the end, and finally, as another gore-splattered specter wanders shyly into a shot, there is a terrible temptation to giggle. It is this unfortunate slide into absurdity, rather than the film’s now-infamous final plot twist, which is The Sixth Sense’s chief characteristic at the end and stops it from being the classic chiller it could have been.

A strange phenomenon is upon us this weekend: the release of an M. Night Shyamalan movie – in this case, Split – which has actually received rather positive early word-of-mouth. It presents film commentators with a challenging brief: Shyamalan’s consistency of awfulness has been such an inevitability that reviewers won’t be able to reprise the usual condescensions about his execrable storytelling skills and the spectacular descent of his career since the heady days of The Sixth Sense (1999) and Unbreakable (2000).

Now that condescension may very well be deserved – anyone who has tried sitting through Shyamalan’s 2006 nadir of The Lady in the Water can attest to that – but the shame is that this bandwagon of ridicule has threatened to sully the legacy of The Sixth Sense: a film which really does deserve its reputation as one of Hollywood’s most accomplished genre films of the last 20 years.

The film’s grand conceit – the startling late twist – now seems to be almost the sole focus of debate when people recall The Sixth Sense (and not always in a complimentary way) but it deserves to be remembered for so much more than its narrative coup de grace.

What Shyamalan managed so well, and what so few modern Hollywood directors have been able to pull off since is the creation of something genuinely cinematic. The Sixth Sense was a bona fide storytelling and cultural event which honored the medium’s origin as a form of spectacle and visceral experience, yet it still managed to be a masterful exercise in controlled, intimate genre narration as well.