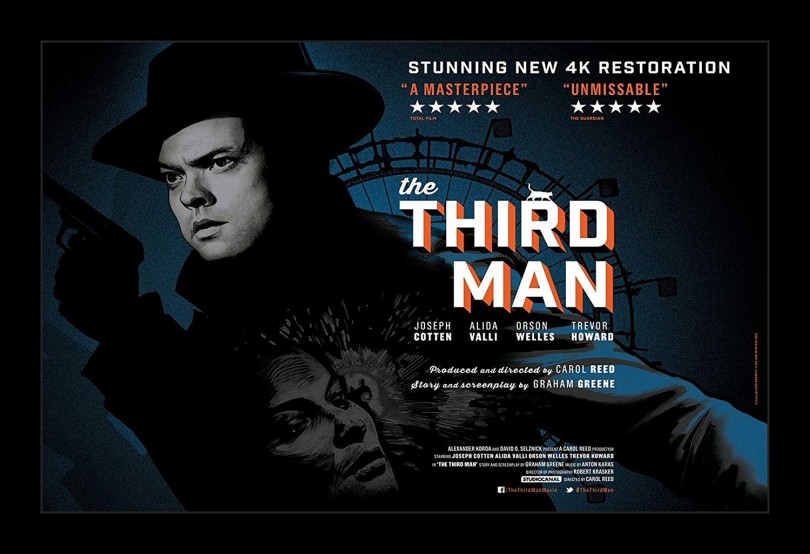 An out of work pulp fiction novelist, Holly Martins, arrives in a post war Vienna divided into sectors by the victorious allies, and where a shortage of supplies has led to a flourishing black market.

He arrives at the invitation of an ex-school friend, Harry Lime, who has offered him a job, only to discover that Lime has recently died in a peculiar traffic accident.

From talking to Lime’s friends and associates Martins soon notices that some of the stories are inconsistent, and determines to discover what really happened to Harry Lime.

Vienna, the late 1940s. The war is over, but the scars remain; the city, divided into zones, is strewn with rubble and debris — ashy memories of what once stood tall. Pale faces glow at nighttime, over dark coats; everyone looks watchful, guarded. Voices echo in the quiet, wet streets, and strangers eye each other suspiciously as if looking for secrets in their faces. In the words of a character in Carol Reed’s sublime “The Third Man,” everyone ought to be careful in a city like this.

Back in theaters after a major digital restoration, this great film noir — initially released in 1949 — is the story of a stranger who wasn’t very careful. And it’s mesmerizing, from the opening notes plucked on Anton Karas’ plaintive zither to that long, haunting final shot as someone walks away, decisively, from someone else’s heart, as the autumn leaves fall.

Everybody has a different experience with “The Third Man,” just as each postwar Vienna denizen who knew Harry Lime had a blinkered impression of the ruthless black-market entrepreneur at the story’s hidden center.

Director Carol Reed’s 1949 film is itself a triumph of disparate tones, colors and intentions. Like many, I have loved this thriller of conscience and betrayal most of my moviegoing life. This is not a universal feeling; read on. But its brand of romantic fatalism is particularly seductive to teenage males, I think, and those who never fully recover from that moviegoing state of being.

This is film noir done up as a slightly rancid poppy seed strudel, a triumph of atmosphere that’s neither neorealism (though it has its moments) nor studio artifice (though there’s plenty), neither an important, high-minded sort of classic (though a 1999 British Film Institute poll named it the peak achievement of 20th century British cinema) nor strictly an entertainment (though screenwriter Graham Greene considered it as such).

Few films more effectively capture the crumbling infrastructure and opportunistic lawlessness of postwar Europe. And none better translate the snaking treachery of Graham Greene’s stories and his worlds of cynical expats and casual betrayal. The Third Man, which has been treated to a 4K restoration and returns to our cinemas this week, is a masterpiece of postwar noir and is arguably one of the greatest British films yet made.