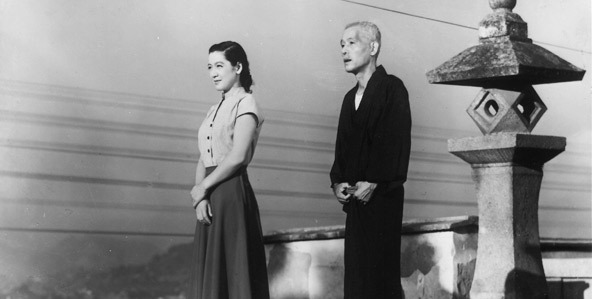 Their other three surviving adult children, who they have not seen in quite some time, live either in Tokyo or Osaka.

As such, Shukishi and Tomi make the unilateral decision to have an extended visit in Tokyo with their children, pediatrician Koichi Hirayama and beautician Shige Kaneko, and their respective families (which includes two grandchildren).

In transit, they make an unexpected stop in Osaka and stay with their other son, Keiso Hirayama.

All of their children treat the visit more as an obligation than a want, each trying to figure out what to do with their parents while they continue on with their own daily lives.

At one point, they even decide to ship their parents off to an inexpensive resort at Atami Hot Springs rather than spend time with them.

The fact that Yasujirô Ozu’s Tokyo Story (1953) is one of the great achievements in cinematic history might be motivation enough to catch it at the IFC Center this weekend. But such talk risks pinning behind glass a work of art that still has the power to astonish, disrupt, and shatter hearts. An aging patriarch (Chishû Ryû) and matriarch (Chieko Higashiyama) finally visit the big city, only to find themselves handled like hot potatoes by their adult progeny and simply expendable in Tokyo’s postwar scramble for economic survival. Though traditional values still dictate the family’s manners and speech, time and money have become too short to waste on sightseeing, caretaking, or basic sensitivity.

We’re granted access to the children’s points of view—they’re selfish yet understandably so, not villains but calloused—but Ozu is most interested in microscoping beneath the polite smiles of their elders, confronting a lifetime of gathered disappointment, facing children they frankly can’t stand to be around. At the root of Ozu’s tragedy is abject futility. Even those who feel the intergenerational debt, such as angelic daughter-in-law Noriko (Setsuko Hara), are powerless to pay it. Ozu’s long shots, knee-high camera placement, and collapsed perspective—as gorgeous and unsettling as a Cézanne—gather power over the duration, but time itself is the master’s most potent weapon.

Protracted sequences make you impatient for forward motion, but then, in an instant, you’re left to mourn beauties hastened away.

The director’s own favourite of his 54 movies, Yasujiro Ozu’s 1953 film ‘Tokyo Story’ surveys the Japanese family in the American-influenced post-war reconstruction period. The story – never the Japanese master’s greatest interest – is a simple one. It concerns the visits paid to their children in Osaka and Tokyo by an elderly couple (Tomi, 68, and Shukishi, 70) from the southern seaside town of Onomichi, a quiet fishing port and traditional centre of Buddhist devotion, which was then a day and a night’s train journey from the high-rises, smoking factories and modernity of Japan’s frenetic capital.

Often topping lists of the best films of all time, and a great influence on many great directors of the last half century, not least for its purity of expression, this remains one of the most approachable and moving of all cinema’s masterpieces. Furthermore, Ozu’s style – with its so-called ‘pillow shots’ (introductory shots of yet-unhabited rooms), low, static camera position, unhurried pacing and elaborately composed frames – has come to look, in an age of refreshed minimalism, more and more modern. Also, his main interest – how ordinary human emotions are expressed in the context of the changing modern family – has become ever more fundamental, relevant and richly rewarding.

When talking about Tokyo Story, that’s not just a summation of how the simplistic plot or deceptive pacing of Ozu’s gentle examination of the widening generation gap in post-war Japan wins you over. It’s also a description of the film’s lot in critical terms over more than six decades.

Derided as “too Japanese” upon release in 1953, it finally found its way to the UK in 1957, winning the British Film Institute’s inaugural Sutherland Trophy in 1958. It didn’t make its way to American screens until 1964, by which time Ozu was dead.

In fact, it was only after screenings in the US in the early ’70s that the film’s reputation as one of the greatest of all time began to emerge. It took until 1992 for it to make the top 10 of esteemed film critics’ Sight & Sound list, and 2012 for it to top the corresponding directors’ list. That’s 59 years of sneaking up on the world’s greatest filmmakers.

As for the audience, Tokyo Story slinks its way under your skin, despite boasting one of the most basic set-ups in cinematic history – old parents visit their grown-up kids, then go home again.

Of course, it’s far more than that. Tokyo Story tells of elderly couple Shukichi (Chishu Ryu) and Tomi (Chieko Higashiyama), who make the lengthy journey from their home in Onomichi to Tokyo to visit their children and grandchildren, in the knowledge they may never get the opportunity to do so again.