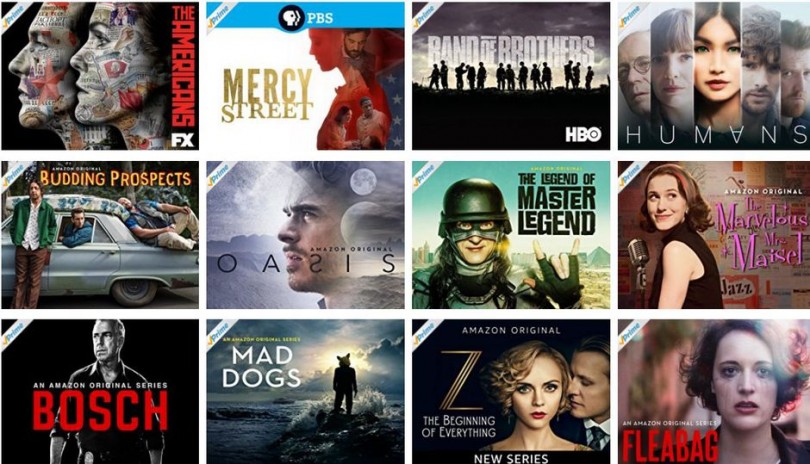 The best Amazon Prime Series to watch in 2022 list includes 20 films which are available on Prime right now. Not only, all these films are worth streaming, but they also tell you why you should pay for an Amazon Prime subscription.

In different parts of the Solar System, the crew of the Rocinante and their allies confront the sins of their past, while Marco Inaros unleashes an attack that will alter the future of Earth, Mars, the Belt, and the worlds beyond the Ring.

A highly select group of Agents from the worldwide law-enforcement organization known as S.H.I.E.L.D. (Strategic Homeland Intervention Enforcement and Logistics Division) investigate the new, the strange and the unknown around the globe, protecting the ordinary from the extraordinary.

The Night Manager is based on the internationally acclaimed novel by master storyteller John le Carré. This suspenseful thriller follows Jonathan Pine, as he endeavours to bring down the notorious arms dealer Richard Roper. Described as “the worst man in the world”, Roper is also responsible for the murder of Pine’s lover, Sophie.

5. Tales From The Loop

Inspired by the wondrous paintings of Simon Stalenhag, Tales from the Loop explores the mind-bending adventures of the people who live above the Loop, a machine built to unlock and explore the mysteries of the universe – making things previously relegated to science fiction, possible.

6. The Man In The High Castle

Based on Philip K. Dick’s award-winning novel, and executive produced by Ridley Scott (Blade Runner) and Frank Spotnitz (The X-Files), The Man in the High Castle explores what it would be like if the Allied Powers had lost WWII, and Japan and Germany ruled the United States. Starring Rufus Sewell (John Adams), Luke Kleintank (Pretty Little Liars) and Alexa Davalos (Mob City).

Broadband installer by day, paranormal investigator by night, Gus is annoyed to be partnered with “noob” Elton, but comes to appreciate having someone along for the ride as they uncover a spike in supernatural activity. They’re soon joined by Astrid, who has ghost problems of her own, and the gang embark upon creating a ghost-hunting YouTube channel, uncovering a terrifying conspiracy as they go.

Star Trek: Picard features Sir Patrick Stewart reprising his iconic role as Jean-Luc Picard, which he played for seven seasons on Star Trek: The Next Generation. The new series will follow this iconic character into the next chapter of his life.

Midge and Susie discover that life on tour with Shy is glamorous but humbling, and they learn a lesson about show business they’ll never forget. Joel struggles to support Midge while pursuing his own dreams. Abe embraces a new mission and Rose learns she has talents of her own.

Hanna attempts to rescue Clara from the clutches of Utrax, with the help of troubled CIA agent Marissa Wiegler, who begins to see in Hanna the daughter she never had. From the dense forests of Eastern Europe, through the vast landscapes of northern England, to the hot hustle and bustle of Barcelona’s university campus, we will follow Hanna on her journey to find her place in the world.

Season Two finds the battle between Old Gods and New Gods moving inexorably towards crisis point as their destinies collide with those of men. In this strange new world, faith requires terrible sacrifice.

In one tragic night, Los Angeles County Sheriff’s Deputy Martin Jones’s life is blown apart, and he is forced into a deadly underground of Cartel soldiers, Yakuza assassins, and mysterious vigilantes. Soon he finds himself lost on a surreal odyssey of murder, mysticism and vengeance, as his past sins close in on him.

In a world where superheroes embrace the darker side of their massive celebrity and fame, THE BOYS centers on a group of vigilantes known informally as “The Boys,” who set out to take down corrupt superheroes with no more than their blue collar grit and a willingness to fight dirty.

A group of teen girls from different backgrounds must fight for survival after a plane crash strands them on a deserted island. The castaways both clash and bond as they learn more about each other, the secrets they keep, and the traumas they’ve all endured. There’s just one twist to this thrilling Drama – Coming of Age … these girls did not end up on this island by accident.

UNDONE is a half-hour, genre-bending, animated series that explores the elastic nature of reality through its central character Alma, a twenty-eight-year-old living in San Antonio, Texas. After getting into a car accident and nearly dying, Alma finds she has a new relationship to time. She develops this new ability in order to find out the truth about her father’s death.

With a serial killer loose on Carnival Row, and a government that turns a blind eye to the deaths of its lower class citizens, Rycroft Philostrate, a war-hardened investigator, is the only person willing to stop the murders and maintain the fragile peace. But when Vignette Stonemoss, a faerie refugee, turns up in the Burgue, she forces Philo to reckon with a past he’s tried to forget.

When CIA analyst Jack Ryan stumbles upon a suspicious series of bank transfers his search for answers pulls him from the safety of his desk job and catapults him into a deadly game of cat and mouse throughout Europe and the Middle East, with a rising terrorist figurehead preparing for a massive attack against the US and her allies.

In Season 3, Jesse Custer’s quest for God takes him back to the place he’s been avoiding his whole life: home. Jesse, Tulip, and Cassidy return to Angelville, the Louisiana Plantation where Jesse was raised, and find old grudges and deadly obligations await them. With the help of his friends – and a few enemies — Jesse will need to escape his past… because the future of the world depends on it.

Tick and Arthur have freed the City from The Terror – now they must defend it from new villains and old enemies. That is if they can convince AEGIS, the government agency in charge of superhero regulation, that they deserve the job. But now that the City is ‘safe enough to protect’ Tick and Arthur begin to see they’ve got competition…