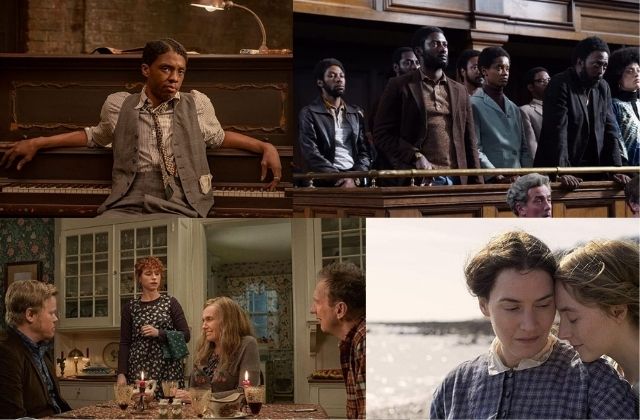 Have you watched these 16 best films of 2020? The list also includes a film which is a story of a group who clashed with the London Police in 1970.

Mangrove tells this true story of The Mangrove Nine, who clashed with London police in 1970. The trial that followed was the first judicial acknowledgment of behavior motivated by racial hatred within the Metropolitan Police.

A young apprentice hunter and her father journey to Ireland to help wipe out the last wolf pack. But everything changes when she befriends a free-spirited girl from a mysterious tribe rumored to transform into wolves by night.

Despite second thoughts about their relationship, a young woman (Jessie Buckley) takes a road trip with her new boyfriend (Jesse Plemons) to his family farm. Trapped at the farm during a snowstorm with Jake’s mother (Toni Collette) and father (David Thewlis), the young woman begins to question the nature of everything she knew or understood about her boyfriend, herself, and the world.

In 1840s England, acclaimed but overlooked fossil hunter Mary Anning (Kate Winslet) works alone on the rugged Southern coastline. With the days of her famed discoveries behind her, she now searches for common fossils to sell to tourists to support herself and her ailing mother. When a wealthy visitor entrusts Mary with the care of his wife Charlotte Murchison (Saoirse Ronan), she cannot afford to turn his offer down.

A young mother reconnects with her larger-than-life playboy father on an adventure through New York.

Tensions and temperatures rise over the course of an afternoon recording session in 1920s Chicago as a band of musicians await trailblazing performer, the legendary “Mother of the Blues,” Ma Rainey (Academy Award® winner Viola Davis). Late to the session, the fearless, fiery Ma engages in a battle of wills with her white manager and producer over control of her music.

As the band waits in the studio’s claustrophobic rehearsal room, ambitious trumpeter Levee (Chadwick Boseman) – who has an eye for Ma’s girlfriend and is determined to stake his own claim on the music industry – spurs his fellow musicians into an eruption of stories revealing truths that will forever change the course of their lives.

8. The Personal History of David Copperfield

A fresh and distinctive take on Charles Dickens’ semi-autobiographical masterpiece, The Personal History of David Copperfield, set in the 1840s, chronicles the life of its iconic title character as he navigates a chaotic world to find his elusive place within it. From his unhappy childhood to the discovery of his gift as a storyteller and writer, David’s journey is by turns hilarious and tragic, but always full of life, color and humanity.

Inseparable best friends and cousins Autumn and Skylar precariously navigate the vulnerability of female adolescence in rural Pennsylvania. When Autumn mysteriously falls pregnant, she’s confronted by conservative legislation without mercy for blue-collar women seeking an abortion. With Skylar’s unfailing support and bold resourcefulness, money to fund the procedure is secured and the duo board a bus bound for New York state to find the help Autumn needs.

Twelve strangers wake up in a clearing. They don’t know where they are — or how they got there. In the shadow of a dark internet conspiracy theory, ruthless elitists gather at a remote location to hunt humans for sport. But their master plan is about to be derailed when one of the hunted, Crystal, turns the tables on her pursuers.

Bacurau, a small settlement in Brazil’s remote backcountry, is shaken by the death of its elderly matriarch. But something strange is happening in the village, and there’s little time for mourning. The water supply has been cut off, animals are stampeding through the streets, and empty coffins are turning up on the roadside. One morning, the villagers wake up to find their home has disappeared from satellite maps completely. Under threat from an unknown enemy, Bacurau braces itself for a bloody, brutal fight for survival.

A searing look at a day in the life of an assistant to a powerful executive. As Jane follows her daily routine, she grows increasingly aware of the insidious abuse that threatens every aspect of her position.

Jane Austen’s beloved comedy about finding your equal and earning your happy ending, is reimagined in this. Handsome, clever, and rich, Emma Woodhouse is a restless queen bee without rivals in her sleepy little town. In this glittering satire of social class and the pain of growing up, Emma must adventure through misguided matches and romantic missteps to find the love that has been there all along.

15. The Painter and the Thief

An artist befriends the thief who stole her paintings. She becomes his closest ally when he is severely hurt in a car crash and needs full time care, even if her paintings are not found. But then the tables turn.

16. True History of The Kelly Gang

Based on Peter Carey’s novel. The story of Australian bushranger Ned Kelly and his gang as they flee from authorities during the 1870s.