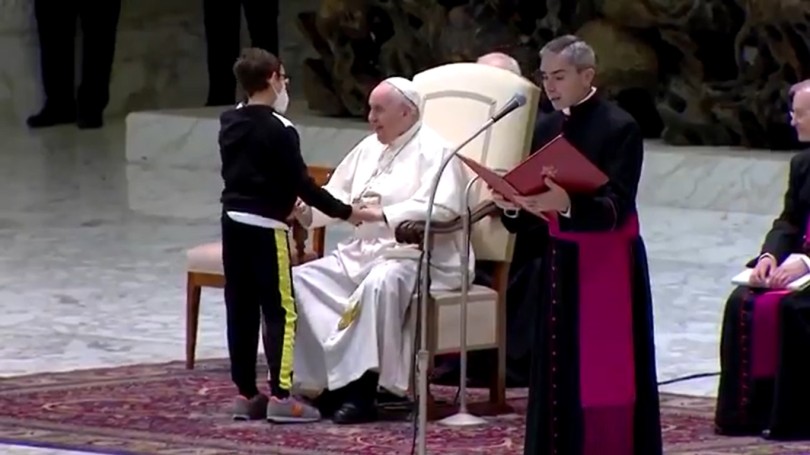 A boy took the spotlight during Pope Francis’ Vatican audience in October, securing the chance to sit at his side and a white papal cap as a reward his persistence when he walked to the stage.

The boy, whom Francis later admitted to having a medical “limitation”, was wearing an apron and tracksuit and seemed to be around 10 years old.

The pope was approached by a twitching step by the boy at the beginning of the crowd in the huge Paul VI auditorium. He, however, did not try to do any harm to his security personnel who didn’t try to hinder him.

A boy stole the show at Pope Francis’ general audience at the Vatican. The boy, who the pope later said had a medical ‘limitation,’ walked on and off the stage freely, returning to the center several times as the pope continued his address pic.twitter.com/uUQHdgRir5

The pope’s hand was shaken while jumping across the floor before him. Once it was clear that he was going to stay for some time Monsignor Leonardo Sapienza, the head of protocol, stood up and handed the boy a chair to the right of the pope.

He was applauded by the crowd after he was seated with Pope Francis, moved around to the side of the platform in a frenzied manner and returned to the center repeatedly as the audience continued to listen to the pope’s address.

The boy pointed several times at the white skull of the pope’s cap, also known as a Zucchetto. Officials were able to take the hint and gave him the same cap, resulting in cheers and applause from the audience of a few thousands.

“I thank this boy for the lesson he has given all of us. May the Lord help him in his limitations, as he grows, because what he did came from the heart,” the pope stated.