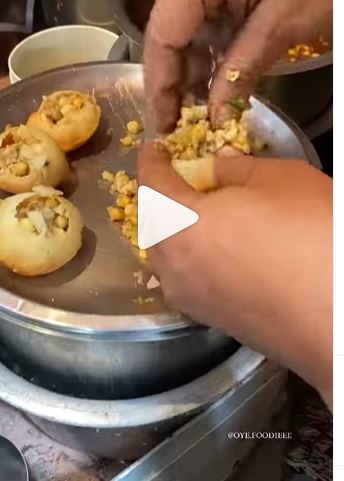 This is for people who just love the taste of chaat, tikkis, and Gappas gol. Have you heard of gol gappas served on plates made of leaf? Video of a street food vendor in the Delhi’s Chandni Chowk area went viral on social media due to the fact that the gol gappas he sells are served in a leaf plate.

The food blogger Arjun Chauhan shared a brief clip of a street food vendor cooking gol gappas in Chandni Chowk’s Padam Chaat Corner. The video went viral, with more than 2 million views. Netizens were awestruck by the vendor serving the food on a leaf plate.

He was seen stuffing his puris with chana and aalu filling. Then, he dipped them in curd. After that, he served gol gappas in a leaf plates and garnished them with sev, chutney and masala.

Aren’t they delicious? We were enthralled by the idea too. In the comments on social media, users were amazed at the dish, and even posted fire emoticons, too.