Home » 50 Maths Jokes For Kids Which Will Make Students Laugh 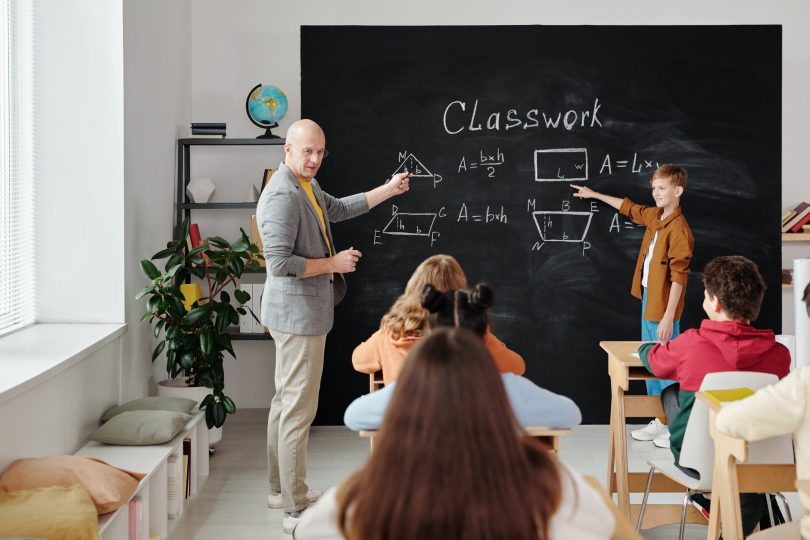 1. Why is it sad that parallel lines have so much in common?

2. What can be right, but never wrong?

3. What did the triangle say to the circle?

4. Why should you never mention the number 288?

5. How can you make seven even?

6. My math teacher has a piece of graph paper.

I think he must be plotting something!

7. Why couldn’t the angle get a loan?

8. Which snakes are best at doing sums?

9. Why was six afraid of seven? “Because seven, eight, nine!”

Because it gives them square roots.

12. What are ten things you can always count on?

13. Why did the student get upset when his teacher called him average?

It was a mean thing to say!

14. Who do geometry teachers like to hang out with?

A small circle of friends.

15. Are monsters good at math?

16. Did you hear that old math teachers never die?

They just lose some of their functions.

17. What do you call an empty parrot cage?

18. Why didn’t the quarter roll down the road with the nickel?

Because it had more cents!

You go to the corner. It’s always 90 degrees!

20. Why can’t your nose be twelve inches long?

Because then it would be a foot.

21. Why do teenagers always travel in groups of three, five, or seven?

Because they can’t even!

22. What did one math book say to the other?

Don’t bother me. I’ve got my own problems!

23. If two is company, and three is a crowd, what are four and five?

25. Why is the obtuse triangle always upset?

Because it is never right!

26. Why did the student get upset when her teacher called her average?

28. Which sea creature can add up?

“Because it had so many problems.” -Suzie, age 5

31. Why can’t you trust mathematicians?

A. Their loyalties are divided.

32. Which snakes are good at math?

33. Teacher: Why are you turning in a blank sheet of paper?

Student: Because all my answers are imaginary numbers.

35. Why is the obtuse triangle always upset?

36. Student One: I saw my math teacher with a piece of graph paper yesterday.

Student Two: She must be plotting something.

37. What do you call a missing octopus?

38. What do you call a man who spent all summer at the beach?

39. What is a math teacher’s favorite snake?

All those numbers you have to carry.

41. If I had six oranges in one hand and four apples in the other hand what would I have?

43. Did you hear about the tree growing outside the maths classroom?

44. Why did the two fours skip lunch?

Because it had too many problems.

46. Which knight created the round table?

47. What do you get when you take the sun and divide its circumference by its diameter?

Pi in the sky.

48. How many apples can you put in an empty box?

One. After that, it’s not empty any more.

49. What do you call a number that just can’t stand still?

But graphing is where I draw the line!