Home » Why Did Media Create So Much Uproar Over Melania Trump’s Jacket? “I really don’t care. Do U?” 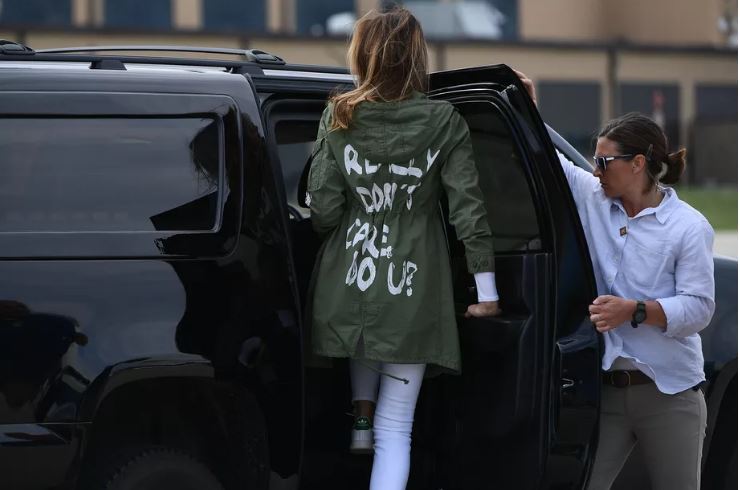 It was a show of concern for children separated from their parents during illegal entry to the US, Melania Trump set out from Washington to a detention center in an even hotter town of McAllen, Texas, but it was the jacket she wore on the expedition that attracted cameras and headlines. Emblazoned on the back of the jacket in large print were the words, “I really don’t care. Do U?

The first lady is something of a mystery to the American people.

Social media and news networks lit up with interpretations and criticism as soon as Melania Trump stepped out in a jacket with a large graffiti slogan.

It’s safe to say a $39 (£29) Zara jacket emblazoned with “I really don’t care, do u?” looks unusual in the wardrobe of a US First Lady – especially a former model known for her designer taste. It was hard to say for sure what she meant by wearing it.

Though government officials and their family members often use clothing to send messages, reading those signals is a real challenge when it comes to Melania, simply because she’s provided so little context to work with.

In the ensuing furore about lack of empathy from the administration, the First Lady’s spokeswoman, in tweets hashtagged #itsjustajacket and #she cares said “no hidden message” need be read into wardrobe choice and urged the press to focus on her outreach. But President Trump had a different script: “I REALLY DON’T CARE, DO U?” written on the back of Melania’s jacket, refers to the Fake News Media. Melania has learned how dishonest they are, and she truly no longer cares!” he tweeted.

Today’s visit w the children in Texas impacted @flotus greatly. If media would spend their time & energy on her actions & efforts to help kids – rather than speculate & focus on her wardrobe – we could get so much accomplished on behalf of children. #SheCares #ItsJustAJacket

So what could the jacket mean? And what was she thinking?

1. It is *literally* just a jacket

This is the view put out by Mrs Trump’s spokeswoman.

“It’s a jacket. There was no hidden message,” Stephanie Grisham told US media. “After today’s important visit to Texas, I hope this isn’t what the media is going to choose to focus on.”

Her husband strayed from her spokeswoman’s official line by tweeting last night that the message choice was on purpose and referred to the media.

“I REALLY DON’T CARE, DO U?” written on the back of Melania’s jacket, refers to the Fake News Media. Melania has learned how dishonest they are, and she truly no longer cares!

3. A message to her husband?

Melania Trump made a rare public statement against the “zero-tolerance” child separation policy
earlier this week.

Maybe the jacket can be seen as her attempt to distance herself from her husband’s policies and
affirm her right to have a distinct agenda and focus?

A lot of people have interpreted the jacket as crass and belittling of people’s concerns about child separations on the border.

We Should All Care