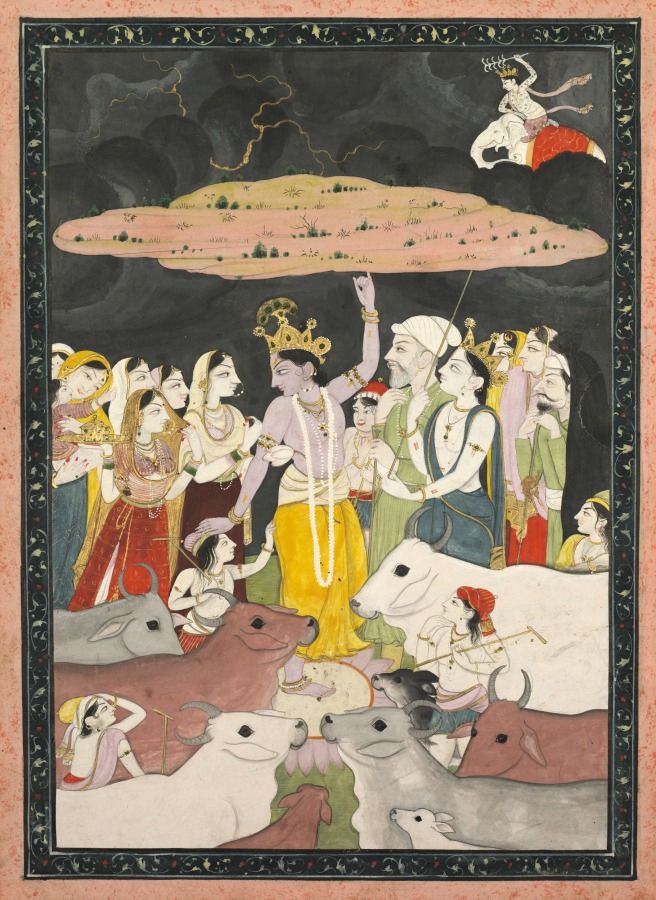 Eid ul-Fitr concluded on June 16 and this year, like its preceding years, saw a familiar painting resurface. As claimed by many on social media, the medieval work of art depicts “Lord Krishna sighting the Eid moon and pointing it to a group of Muslim men and women”.

Several people, including the likes of Shashi Tharoor and Yogendra Yadav, shared an image of the painting, proffering a message of religious harmony and tolerance.

EID MUBARAK
Reproduction of an 18th century Rajasthan miniature depicting Lord Krishna sighting the Eid moon and pointing it out to a group of Muslim men and women.  Let’s resolve on this Eid to win back the spirit of Indìa the picture depicts.
(Courtesy: Navina Jafa) pic.twitter.com/lwTraLYfo7

While some users on social media claimed the painting to be the work of Muslim artists, others claimed that it is a reproduction of an 18th century Rajasthani miniature. However, none cited a source.

The painting was first posted by Swarajya, in a 2015 article written by Dipankar Deb. However, it has now been taken down to “review for factual accuracy and references.” 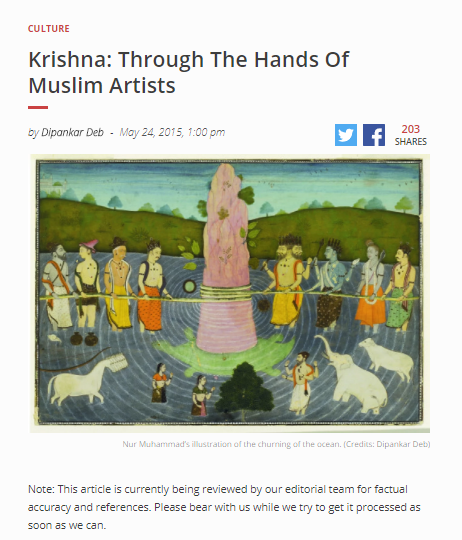 Deb is the author of the book ‘Muslim devotees of Krishna’. He failed to provide the source of the painting when questioned by many on Twitter.

Since his article was published in Swarajya, the painting has resurfaced every year during the festival of Eid. It was also shared by Shabana Azmi and Rajdeep Sardesai last year.

Where is the painting really from?

In response to a Facebook post by Indian historian Harbans Mukhia, whose principal area of study is Medieval India, author Rana Safvi sought the provenance of the painting. Ali Nadeem Rezavi, Coordinator, Musa Dakri Museum, at Aligarh Muslim University, commented that the painting, as already clarified by Prof. Mukhia, is an 18th century Rajasthani miniature and not a Mughal work of art. Rezavi wrote that the miniature was from Bikaner, painted by Ruknuddin.

The Metropolitan Museum of Art (Met) describes Ruknuddin as a 17th century Rajasthani painter who was a “master of colours and art”. He accompanied the rulers of Bikaner on their military campaigns to the Deccan, as part of their contractual services to the Mughal court. Ruknuddin is associated with painting several portraits there in a “distinctively Mughal manner”.

To ascertain if the miniature in question was, in fact, painted by Ruknuddin, Alt News contacted Pravin Mishra, Artist and Chairperson, Crafting Creative Communication programme, MICA, to compare it with Ruknuddin’s paintings found on The Met website. 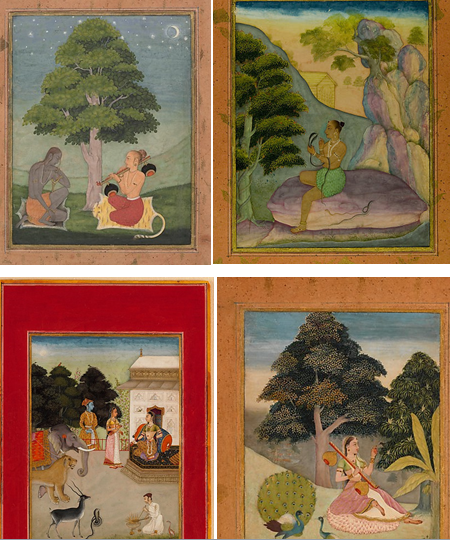 “These paintings are very different from the one in question. These look like works of either the same artist or gharana, whereas as the other one looks like the work of a different artist/gharana,” said Mishra.

“Even though I cannot conclusively ascertain the artist behind the paintings, my reasons for putting them in separate brackets is the difference in perspective and composition in both the sets,” he added.

To further establish the origin of the painting, Alt News reverse image searched the painting via Google and stumbled upon another miniature (housed by The National Museum, Delhi) which depicted similar characters. It’s provenance dated back to 18th-century Pahari paintings.

The Pahari gharana originated and flourished during the 17th-19th centuries. It developed in the Himalayan region of North India, Kangra (named after the princely state in the then Himachal Pradesh) becoming the most prominent of its styles. Pahari gharana was distinct from Mughal-influenced art, depicting Radha and Krishna in many of its paintings. 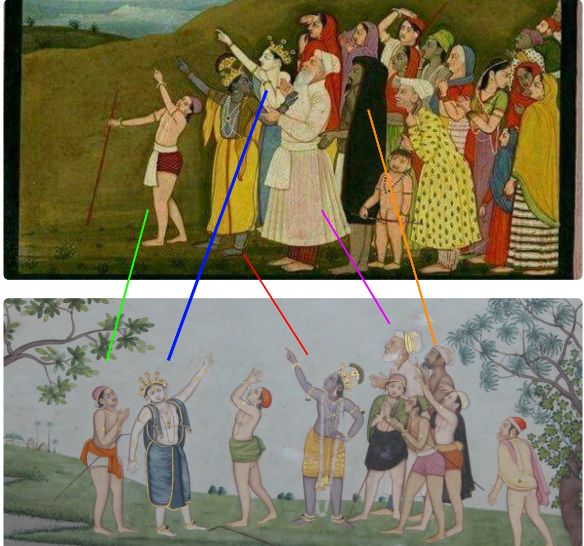 We found another painting depicting similar characters and purportedly also a part of the Pahari gharana. It is a miniature of Krishna lifting Mount Govardhana to protect the inhabitants of Vrindavan from heavy rain and thunderstorm.

Both the paintings were analysed by Mishra who pointed out certain aspects which suggested similarities between these Pahari paintings and the one in question.

“The gestural depiction of all the characters is very similar in these paintings. The folds and the translucency of the fabric, the choice of hues, and the texture and brush strokes of the clouds have a lot of similarities.

Though one cannot really make a conclusive claim about the artist being the same in terms of the composition, one can say with certain confidence that these could have been painted either by the same artist, or artists who have worked closely with each other meaning, the same gharana. The most striking similarity one can see is in the detailing of the jewelry and other accessories,” he explained.

Alt News reached out to Indian Art Historian and Critic Dr. B.N. Goswamy for his insights on the origin of the painting and what it truly depicts. “I must confess that I had not seen this image before, despite being quite familiar with the Bhagavata Purana and this series of paintings from the Tehri-Garhwal collection (painted by one of the members of the first generation after Manaku and Nainsukh). Terming this a Rajasthani artwork is a silly assessment. Of course, it is not. It is a Pahari painting from the series to which I have referred above.”

Arguing against claims on social media suggesting that Lord Krishna is in the company of Muslim men and women, Dr. Goswamy said, “the present ‘reading’ of it is completely meaningless based as it is, chiefly I think, on the appearance of Nanda who is dressed like a Mughal courtier: with that kind of beard, and wearing a long jama (clothes) and a sloping turban.

There’s an anachronic impossibility for a Muslim figure to be seen in the Bhagavata Purana or this series apart, this is the way Nanda appears in every single folio of this series whenever we see him. Even in this regard, if one notices from close the jama Nanda wears is clearly a Hindu style jama, tied as it is, in Hindu-fashion, under the left armpit. There is not the slightest doubt about this.”

Nearly every person who shared the painting captioned it as “Krishna sighting the moon”; however, Dr. Goswamy clarified that this cannot be conclusively said. “The pointing towards the moon in the sky by Krishna and Balarama seems to be from an obscure passage, possibly in chapter 28 of the tenth skandha, where Krishna, after rescuing Nanda from Varuna who had seized him and taken him to his dominions, leads him and other kinsmen, using his powers of illusion, to a vision of his domains.

There, after the rescue, the text says, Krishna “manifested to the cowherds his own realm” which is beyond the range of tamas. One cannot be certain; however, it is not unlikely that the episode occurs more fully in some other rescission of the Purana and not the one generally in circulation.”

Our research and the assessment by experts in the field point at certain facts missed by most who posted the painting – one, the painting isn’t an 18th century Rajasthani miniature but a Pahari work of art; and two, Krishna was not pointing to Eid moon as shared by many on Twitter; and three, the painting does not depict him as in the company of Muslim men and women.

The Pahari miniature has been floating across social media platforms for at least three years now, resurfacing every Eid, along with an incorrect narrative. Those who shared the image on Twitter probably did so because they wanted to send a message of communal harmony by showing Krishna celebrating Eid and the image appealed to them. The depiction maybe well-meaning but is inaccurate. We wont be surprised if the image will resurface during the next Eid.