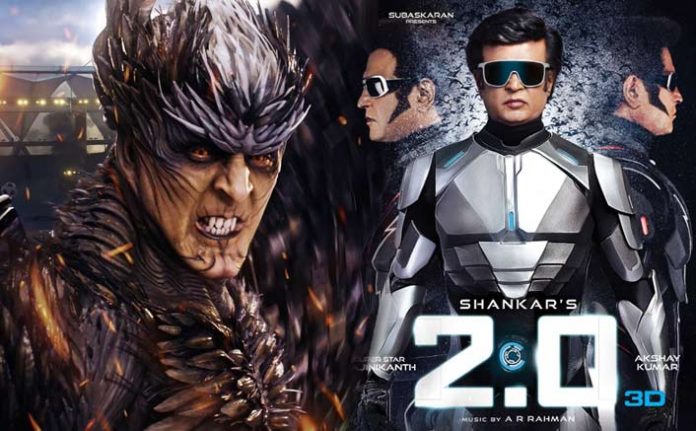 Dr Vaseegaran (Rajinikanth) and his android assistant Nila (Amy Jackson) are called in for help after mobiles start mysteriously flying out of the hands of people in Chennai. Vaseegaran summons his trusted robot Chitti (Rajinikanth) to ward off the bird-shaped supernatural powers of Pakshirajan (Akshay Kumar).

8 years after Chitti was dismantled due to destruction he caused. Vaseegaran has created new human robot Nila which can understand human feelings better. The cell phones in the city start to disappear from everywhere. A creature in the form of bird creates havoc in the city causing destruction. Vaseegaran believes it to be the fifth element force and decides to get Chitti back in action. When Vaseegaran traces the location of missing cellphones with help of Chitti and Nila he finds that its not the fifth force but a human force done by late professor Pakshi Rajan.

Like the title suggests, Shankar’s latest venture is quite literally the 2.0 version of his earlier film Robot. The film revolves around the familiar theme of a wronged individual taking revenge on the people who ruined his life – and Shankar gives us a film that has a blend of sci-fi, horror and a whole lot of special effects.

The film begins with an old man committing suicide from atop a mobile phone tower. And then, in comes Dr Vasigaran (Rajinikanth), a scientist, along with his assistant Nila (Amy Jackson), a humanoid robot. Soon, mobile phones start flying off the shelves and out of everyone’s hands, and Vasigaran is called in to investigate this mysterious occurrence. And when a giant bird, made up of mobile phones, starts attacking the city, the scientist is forced to bring back Chitti, the now dismantled robot.

Chennai is under attack. Every cellphone in the city — from the ones used by fisherwomen to one being used to take a funeral-selfie — has flown from the hands of users and vanished into the sky, leaving everyone befuddled. I found one floated theory particularly interesting: what if this is a rival cellular phone company trying to establish itself? Considering the way a certain service provider has busted the kneecaps of the competition with savagely predatory pricing, I wondered if this film’s villain was a stand-in for one of India’s megacorps: Could 2.0 give us Rajini vs Ambani?

No dice. Director Shankar has unfettered visual imagination and unconventional thinking, but despite well-meaning ideas at the core of his stories, his cinema flirts with relevance instead of committing to it. The 2010 film Enthiran, also known as Robot, was essentially a Frankenstein film set in a world of artificial-intelligence, but what Shankar had truly cracked was a way forward for his mythically outsized leading man: Rajinikanth played bearded and mild-mannered scientist Vasigaran, while all the punches and punchlines were saved for Chitti the Robot, his clean-shaven and highly superhuman alter-ego.

Director Shankar’s films follow a certain template. We are introduced to a normal guy who takes on a larger-than-life villain in a mission to end some form of negativity. Basically, the usual good vs evil template is set against different backgrounds and they are given an out-and-out commercial-film treatment.

His latest outing 2.0 is no exception. It follows a similar path. Dr Vaseegaran (Rajinikanth) is a scientist who encounters the fifth force with his inventions Chitti, Nila (Amy Jackson) and 2.0 (Chitti reloaded robots).

All of Chennai is in grave danger as a mysterious looking crow is destroying the city. As expected, Chitti is brought back to take on the giant bird made out of mobile phones. However, Chitti alone is unable to save the people. In come 2.0 robots, with their quick wit and destruction power to take on Pakshi Raja alias Crow Man (Akshay Kumar).