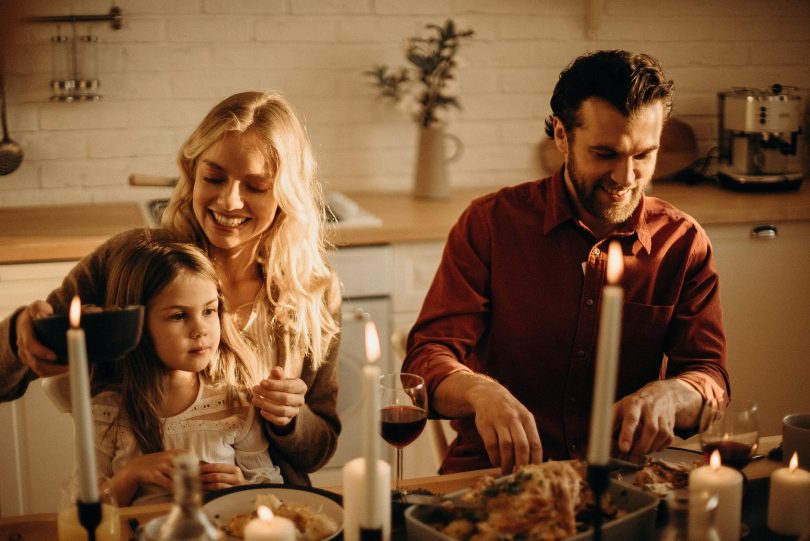 1. “What did the turkey say to the turkey hunter on Thanksgiving Day?”

2. “My grandma made mashed potatoes from a box.

3. “Why did the farmer have to separate the chicken and the turkey?”

4. “Why did the cranberries turn red?”

“Because they saw the turkey dressing.”

6. “What did the mother turkey say to her disobedient children?”

“If your father could see you now, he’d turn over in his gravy!”

7. “Why did they let the turkey join the band?”

“Because he had his own drumsticks.”

8. “Why was the Thanksgiving soup so expensive?”

9. “What happened to the turkey that got in a fight?”

“He got the stuffing knocked out of him!”

Norma Lee. Norma Lee who? Norma Lee I don’t eat this much!

“Because he will gobble it up.”

14. “What role do green beans play in Thanksgiving dinner?”

16. “What do you wear to Thanksgiving dinner?”

“A turkey holding its breath.”

18. “Why didn’t the cook season the Thanksgiving turkey?”

“There was no thyme!”

19. “What’s the best song to play while cooking a turkey?”

“All about that baste.”

“He wanted people to think he was a chicken.”

22. “Which holiday is Dracula’s favorite?”

24. “What’s the best dance to do on Thanksgiving?”

“He was already stuffed.”

26. “What instrument does a turkey play?”

30. “What kind of noise does a limping turkey make?”

32. Where does Christmas come before Thanksgiving?

“Norma Lee I don’t drink eat this much!”

“Tamara we’ll eat all the leftovers!”

“Because they wear their buckles on their hats!”

“Don eat all the gravy, I want some more.”

42. What do you call a running turkey?

43. What type of glass does a turkey drink from? A goblet!

44. If the pilgrims were alive today, what would they be most famous for?

For living so long!

45. What do you call a turkey the day after Thanksgiving?

46. A turkey was arrested. What were the charges?

47. Are turkey leftovers good for your health?

Not if you’re the turkey!

48. What should you wear to Thanksgiving this year?

49. What does Thanksgiving have in common with Halloween?

50. What kind of music did the pilgrims listen to?